By Wes Williams and Steve Sitter

Baseball fans in the Coachella Valley do not have to drive 90 minutes to see high quality baseball. Top college prospects from the Pac 12, Big West, SEC, Big Ten, and the Big 12 converge on downtown Palm Springs each summer to play for the Palm Springs Power.

Fans can enjoy the national pastime each summer evening under the cool misters of historic Palm Springs Stadium, former spring training home of the Los Angeles Angels of Anaheim.

Elite college players compete each year in collegiate summer baseball leagues with teams like the Palm Springs Power. The most well-known league is the Cape Cod League, with teams like the Chatham Anglers having produced Jeff Bagwell, Thurman Munson and Evan Longoria in their 54 year history.

The Power play in the Southern California Collegiate Baseball League, which includes six teams.  The team has an overall record of 465-130 and has won seven league championships, including five straight from 2011 to 2015.  Last year, the Power finished in second place in the league with a record of 28-11.

Andrew Starke is the founder and president of the Palm Springs Power.  Starke continues to place great importance on community involvement, earning praise not only from the Palm Springs Chamber Of Commerce, but from Mayor Robert Moon as well.

While they are not the first team to play in historic Palm Springs Stadium, they have achieved the greatest level of success there since the Angels in 1961.

According to Starke, “The lack of success of previous teams was well documented, but there was one glaring mistake that they were all committing; none of those minor league teams were local, and the community couldn’t relate.  I look at the success of Gene Autry’s Angels, and used that as a template for creating a hometown team that the community can really get behind.”

Earlier in the year, Starke named Casey Dill as manager of the Power.  Dill has an extensive background in professional baseball and hopes to add to the already successful Palm Springs baseball franchise.

“This is a team whose success is determined by winning championships and promoting our players into MLB organizations” Dill said. “We aim to stay at the forefront of player development and knowledge of MLB scouting standards to continue to guide and lead our players into professional baseball.”

Dill has nine years of professional and summer collegiate managing experience, earning an overall record of 371-220 with four league championships. He is a graduate of Major League Baseball Scout School and also works as an Associate Scout with the Atlanta Braves.

“The greater Palm Springs community does a great job embracing the Palm Springs Power as the hometown team. Our mascot Rocky the Ram is one of the most recognizable characters in the community. It is an honor and pleasure to manage a team that is loved and supported as well as the Power is in Palm Springs.” said Power Manager Casey Dill.

On top of coming out to the ballpark for top level baseball from elite college players, fans can come out for an entertaining evening in Palm Springs.  Kids can enjoy the bounce house and meet Rocky the Ram down the third baseline. Adults can enjoy dollar beer night throughout the summer on Tuesdays.

“Power games are a blast and they’re affordable for the whole family to come. It is a wonderful social atmosphere and the kids always have fun in the bounce house and the race around the bases” said longtime Palm Springs resident Wendy Patterson. 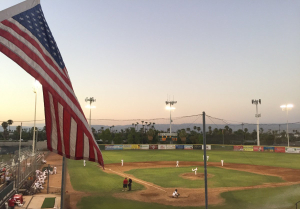