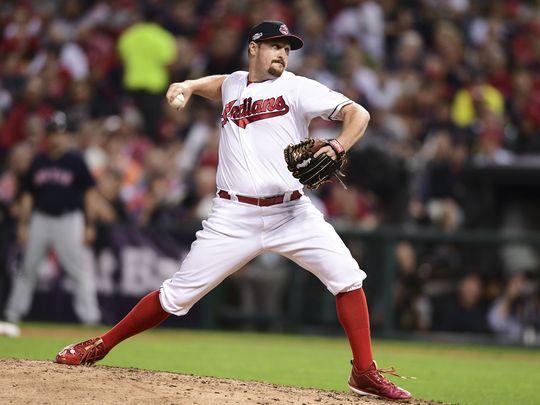 The World Series begins this evening with a showdown between the Chicago Cubs and the Cleveland Indians. While the national focus will be on the Cubs trying to end their infamous 108-year World Series Title drought, there is a local presence in this national affair. Former Palm Springs POWER pitcher, Bryan Shaw, is currently serving as one of the Indians’ top relievers.

Shaw has appeared in seven games this postseason, bridging the gap to dominant reliever Andrew Miller. Over the course of the regular season, he put up a strong line of 3.24 ERA, 1.26 WHIP and 69 strikeouts in 66.2 innings pitched. He spent a brief period as the team’s closer, but was ultimately moved back into the setup role in which he thrived earlier in the season.

Shaw represents the first Palm Springs POWER player to ever appear in an MLB World Series game. The club wishes him the utmost success in the upcoming series. For more background on Shaw, here is what the Desert Sun wrote about him this morning:

Back in 2006, an 18-year-old pitcher named Bryan Shaw had completed a successful freshman season with Long Beach State University. He needed to take some summer classes, but wanted to get some live baseball in — enter the Palm Springs Power.

“He was the first pitcher we had throwing consistently 95, 96 miles an hour and he was a free-spirited kid,” Palm Springs Power president Andrew Starke said. “He was only 18, which is young for our team, but he fit in well with the 21- and 22-year-olds.”

Shaw was dominating in his closer role for the Power, earning the nickname Bryan “Lights Out” Shaw. He had a zero ERA (which is good), and didn’t blow any of his save chances. The Power, which started that season 17-0 and finished 37-5, won by large margins so often that Shaw only had eight save chances, which he converted. He didn’t yield a run until the first game of the playoffs. He finished the year 1-1 with 21 strikeouts in 16 innings.

Starke said he wasn’t surprised that Shaw went on to Major League success, not just because of his talent but because of his demeanor with the Power, especially for an 18-year-old.

“He wasn’t arrogant. Wasn’t a jerk in any way,” Starke said. “Just a good young person, somebody that it was easy to root for. He still keeps in touch with a lot of his teammates from that team. He’s a down-to-Earth guy, didn’t get a big head or anything when he started making millions. I’m rooting for him.”

He wasn’t a hot dog type of player, but Starke remembered one time when Shaw hot-dogged it in the bullpen, literally.

“Like I said, he was kind of a free spirit, and I looked down into the bullpen during a game once, and he’s sitting there eating a hot dog,” Starke said. “I went down there and said, ‘What are you doing?’ and he said, ‘I was hungry and this little kid was talking to me and he said he’d get me a hot dog. I said thanks and he got me one.’ He said it like ‘Ho-hum. No big deal.'”

Shaw went on to a successful career with Long Beach State and then was drafted by the Arizona Diamondbacks in the second round of the 2008 draft. He made the majors in 2011, pitching two years for the Diamondbacks before joining the Indians prior to the start of the 2013 season.

While with the Power, Shaw stayed in a hotel some nights while driving back and forth to take classes in Long Beach. It was that summer classwork that worked in the Power’s fortune as far as having a talent like Shaw on the team.

Starke said he was friendly with Long Beach State coach Mike Weathers, when Weathers approached him with an idea.

“He said ‘I got a situation with this kid taking summer school classes, and he’s a quality player, and he needs a place to play, and you’re really going to like him,'” Starke recalled. “He came on and we picked him up in the spring time, which was rare for us as we usually had the team mostly set the previous fall. But it all worked out and he fit in right away.”