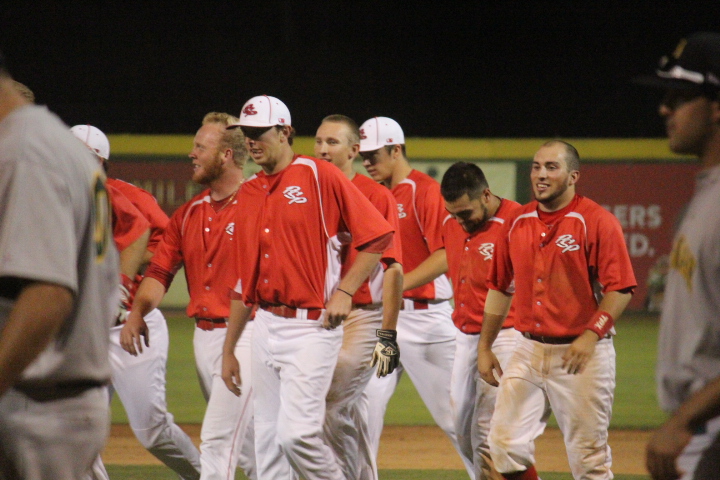 Fireworks might have been last night but the POWER had some of their own fireworks on the field tonight. The POWER jumped out to a quick score and lead to 4-1 after 7 innings of play and that’s when the nail biting started. After loading the bases, Vande Gutche scorched a ball off of Nick King’s glove which brought in two runs and tied the score. But it didn’t end there. In the top of the 9th pinch hitter Matt Glomb ripped a single to CF which at that point gave the Legends their first and only run of the series. But the POWER were not willing to go down quietly. The POWER started the bottom of the 9th with three straight singles. After a sacrifice fly from Nick King and Hayden Nielsen, the POWER tied the game at six in the 9th with two outs. Then Brandon Gomez came up with two outs, a man on 2nd and the game hanging in the balance. Gomez hit a ground ball past the pitcher’s mound, but soft enough where Legend SS Trevor DeMerritt had to charge the ball but he couldn’t get a good handle on the ball as the final run came around to score thus sealing a 7-6 comeback win for the POWER. As head coach Harry Gurley noted after the game. “This team has a lot of heart and they really come to play every night”.

The POWER look to keep the wins rolling tomorrow as they go for their third straight win this season against the OC Waves. Desert Christian Academy alum Morgan Earman makes his pitching return to the Cochella Valley at Palm Springs Stadium with the first pitch at 7:05 pm.