PALM SPRINGS, Calif. – Court Iorg was once again a part of a Palm Springs POWER walk-off win when he scored on a wild-pitch in the bottom of the ninth inning to erase a 5-run deficit to hand the POWER their 31st win of the season, 7-6.

Luke Barker once again got the starting nod against the Inland Valley Pirates and he started his outing on fire. Barker did not allow a hit in his first 4.1 innings of work as he delivered some of his best work in a POWER uniform on Wednesday night.

Barker would run into some unfortunate luck in the fifth as Drew Seelman drew a walk in a lengthy at-bat. That was then followed up by a triple, the first hit given up by Luke Barker, by Sergio Robles of the Pirates that score Seelman. Robles then came into score on a groundout by Nick Marshall to gain an early 2-0 lead.

In the bottom of the fifth, the POWER would answer by scoring a lone run after Jonathan Serven and Erik Maki lead the inning off with back-to-back singles. Nick Jackson notched the RBI with a 1-out single.

The first four innings of the game were by far controlled by the pitchers, but the hitters dominated the next three. The runs came pouring in starting in the seventh inning where the Pirates plated four runs in their half of the inning.

The inning started with a lead-off walk given to Drew Seelman by the POWER reliever Jordan Cavazos and then a single by Johnny Reynoso moving Seelman to third. A botched sacrifice fly hit by Justin Gomez allowed the first run to score and then Nolan Henley smacked a double into left-center field that would score Gomez. Ryan Avila would come into the game and allow another walk and single to push the Inland Valley lead to 6-1.

The POWER wouldn’t go down without a fight as they sent 10 batters to the plate, recorded four hits, drew three walks and scored five runs in the seventh inning alone. A big hit came from Connor Hornsby who notched an RBI bloop-single down the right field line with one out. Jonathan Serven then would get an even bigger hit to tie the game at six with a two-out, two-RBI single.

Ryan Avila would keep the Pirates off the scoreboard in both the eighth and ninth innings, and that would set the table for Court Iorg to score the game-winning run on a wild pitch thrown by Pirate pitcher Brett Early to give the POWER the 7-6 win.

The win would make the final SCCBL record for the POWER at 14-6. Their playoff spot is still in limbo as they are waiting for the conference-leading San Diego Force to finish their season. The SCCBL playoffs are set to begin on Monday, July 20th.

The full season for the POWER is not yet over as they will host the East LA Dodgers on Friday night at Palm Springs Stadium in a non-conference matchup starting at 7:05. To stay up-to-date on the SCCBL playoffs and all things POWER you can follow them on Twitter at @PSPowerBaseball. 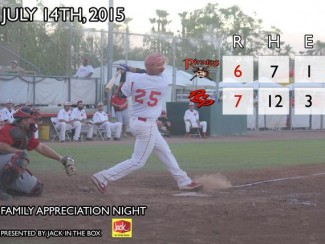