The POWER bats were quiet in the early innings, as Aces starter Taylor Fallon kept the home team off the board through four innings. But the Palm Springs offense exploded with five runs in the fifth inning. The POWER offense was led by Evan Boyd (JR, Mercer University) who drove in three runs on two doubles, a single and a walk. Those hits extended Boyd’s hit streak to 12 games. 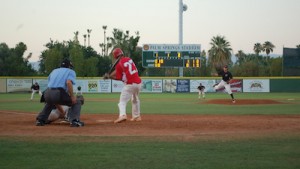 Palm Springs’ record improved to 21-3 overall and 12-1 in league play. McCarthy picked up the win, improving to 4-0. With 19 games to go, the POWER will seek to hold on to their current spot atop the standings.

The POWER take on the Nor Cal Yankees tomorrow evening, the third of six games in six days for Palm Springs. First pitch will be at 7:05 pm, with the gates opening at 6:00 pm. All POWER games can be heard live on www.PSPBB.com, with select games simulcast on NewsTalk 920 KPSI Palm Springs. Also, be sure to check out our blog for more team information, including the lineups before every POWER game.