PALM SPRINGS, Calif. – In a tune-up game before the So Cal World series, the Palm Springs POWER took care of business against the East LA Dodgers by shutting them out 7-0.

A big first inning would give the POWER early momentum and the POWER kept it for the remainder of the game. All nine batters would come up to the plate in the first, scoring four runs on five hits. Erik Maki got thing started with his one-out double and he would later score on Court Iorg’s single. Daniel Sander would compliment the inning with an RBI single of his own that scored Dillan Smith. The next run was scored on a sacrifice fly off the bat of Ian McLoughlin before Max Compton would drive in the fourth and final run of the inning.

Angel Delgaldo threw five scoreless frames to earn his fourth win of the year while also striking out five and only giving up three hits. Relievers Danny Diaz and Jonathan Serven would preserve the shutout for the rest of the game, only letting East LA earn one more hit.

The POWER bats were also held scoreless up until the sixth inning when Tyler Finkler drove in Court Iorg to make the score 5-0. Two more additional runs would be scored in the eighth inning after an Ian McLoughlin RBI single and a bases loaded walk awarded to Kobie Foppe.

The POWER will begin the Southern California World Series on Wednesday night against OCCL-champion OC Waves. That will serve as the first game of a best-of-three game series that will be hosted at Palm Springs Stadium. 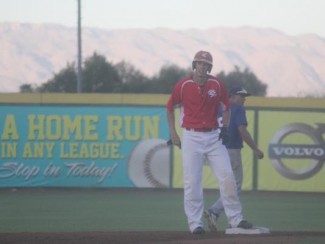