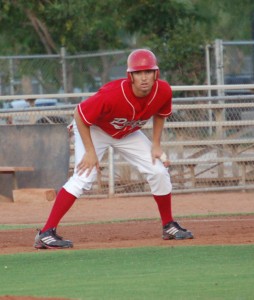 June 9, 2010 -The POWER took a 3-0 lead in the first inning and never looked back as they defeated the Trombly Thunder by a score of 10-1, moving to a perfect 5-0 on the season.  The first inning lead came compliments to a Chris Wilson 2-RBI double and a Marcus Romero RBI single.  Brett Christopher and Chett Zeise fired up the burners in the first with singles of their own and came around to score the first two runs of the game.

The POWER scoring barrage didn’t stop there.  Two innings later, the POWER threw four more runs up on the scoreboard.  This time around it was Zack Haley continuing his hot streak, ripping a 2-RBI double to left-center field.  Christopher added an RBI of his own with a double later on in the bottom of the sixth.  Romero finished 4-4 on the night with one run scored and one RBI.

Impressive pitching performances for the POWER came from starter Thomas Taylor and lefty James Crockett out of the bullpen.  Taylor tossed five shutout innings while earning the win in his POWER debut, while Crockett gave up only one run through three innings out of the bullpen.

The POWER return to action Friday night at Palm Springs Stadium when they take on the East L.A. Dodgers.  First pitch is scheduled for 7:05 PM and the gates open up at 6:00 PM.  It will be State Farm Night at the ballpark.