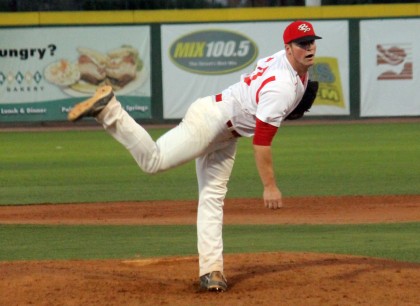 PALM SPRINGS, CA – Right fielder Brooks Klein went 3-for-4 with three RBIs, including a two-run double to start the scoring in the first, as the POWER (37-6) defeated the Long Beach Legends (36-17) 8-0 in game one of the Southern California Collegiate Baseball League Championship Series on Tuesday.

Jake McCoy (3-0) got the win as four POWER pitchers combined to strike out 15 batters in a two-hit shutout of the Legends.

The biggest play of the game came in the bottom of the first when Chad Clark stepped to the plate and lifted a high fly ball at Legends’ center fielder Daniel Catalan. Catalan attempted to make the play, but dropped the ball for a two-base error as Clark moved to second and Hank Yates, who singled one batter prior, went to third. The POWER would capitalize immediately on the blunder as Klein crushed a double to the left-center wall scoring Yates and Clark.

Catalan would be charged with another error in the inning as his throw from center on Chesny Young’s single went wide of the plate allowing Klein to come home to make it 3-0. The POWER added another run in the frame when Ryan Jones hit a sacrifice fly to deep center to cash in Young.

The POWER bats matched their first-inning effort with another four-run frame in the second to take a commanding 8-0 lead.

The two teams go back at it tomorrow as Palm Springs looks to close out Long Beach on Dollar Admission Night at Palm Springs Stadium.