Plenty of POWER on 2013 All-Star Team 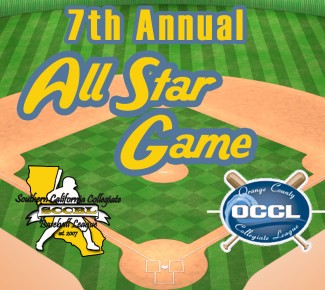 PALM SPRINGS, Calif. – The 2013 Southern California Collegiate Baseball League All-Star selections were announced on Monday, and once again the POWER are well represented among the league’s best. Eleven of the 31 players picked to represent the league donned the red-and-white this season, the most of any SCCBL team.

Starting pitcher Keaton Hernandez was selected after posting a 6-0 record and a minuscule 0.97 ERA. The right-hander has 49 strikeouts in 37 innings pitched and has allowed just one earned run as a starter.

Fellow starter Kyle Crawford was tabbed as an all-star after recording a 5-1 record and 2.70 ERA in seven starts. The left-hander has struck out a team-high 59 batters while walking just eight over 56 2/3 innings.

Left-hander Mitch Bluman earned an all-star selection after establishing himself as an anchor in the POWER rotation. The San Diego State-product is 2-0 with a 2.74 ERA and 26 strikeouts in 33 1/3 innings.

Reliever Mark Lukowski was the fourth and final Palm Springs pitcher selected. The Creighton-product boasts a team-best ERA of 0.64 and has not walked a batter in 28 innings pitched.

On the other end of the battery, catchers Austin Barrett and Mark Lindsay both nabbed all-star nods. Barrett has been a steady presence at the plate both offensively and defensively, hitting .351 with a pair of home runs and only one error in 24 games played. Lindsay batted .333 with nine RBIs while throwing out eight would-be base-stealers to lead all POWER catchers.

Brett Sullivan netted a spot on the all-star roster after a strong season at the plate that saw him hit .360, best on the POWER, with 25 RBIs and 14 extra-base hits.

The POWER are represented at every position in the SCCBL infield. At third base, TJ Bennett received a nod after pacing the Palm Springs offense this summer. To go along with his .356 batting average and two home runs, Bennett currently leads the squad in hits (53) and doubles (11) and is tied for the lead in RBIs (31). On the opposite corner, first-baseman Ryan Jones garnered his second-straight all-star selection after leading the league in home runs with six.

Up the middle, Ryan Raslowsky and Michael Massi each secured a spot on the all-star team in their first summer in Palm Springs. Raslowsky had a strong season in the lead-off spot for the red-and-white, posting a .317 batting average, 28 stolen bases and a team-high 37 runs scored. Massi rounded out the infield at shortstop after hitting .356 and 31 RBIs to equal Bennett’s team-high mark.

The SCCBL All-Stars will play the Orange County Collegiate League All-Stars on Saturday, July 27 at Palm Springs Stadium. First pitch is scheduled for approximately 7:05 p.m., with the Home Run Derby preceding the game at 6:15 p.m.