Flanagan and Guerra Lead POWER in Avenging Sweep of Pirates, 4-3 and 10-4

AZUSA, CA — The Palm Springs POWER took their first road trip Thursday afternoon, and they looked non the wearier for their travels. After snapping an 11-game winning streak Wednesday night at home to the Azusa Pirates, the POWER traveled to Azusa Pacific University, home of the Pirates, and came away with two convincing wins, 4-3 and 10-4. Sean Flanagan (SR, University of Iowa) hit two home runs and Tony Guerra (JR, California State University, San Bernardino) picked up two saves, his fifth and sixth on the season. 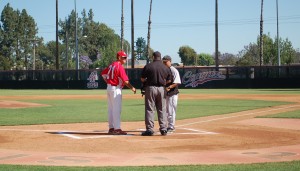 Nick Baker (SO, California State University, Chico) had the ball for Palm Springs in game one, looking for his fourth win as many starts, but Baker had to wait. The POWER batted first for the first time this season, as they had played their first 15 in the confines of historic Palm Springs Stadium, and they wasted no time, slapping two singles in the first, one by Curtis Gomez (SO, University of the Pacific) that extended his hitting streak to nine games.

The POWER later scored first in the second inning, when Flanagan doubled in speedster Justin Cureton (JR, Indiana University). They would lead the rest of the way.

Palm Springs put a run across in the third and fourth as well. Rangy outfielder Marcus Romero (SR, Southern Utah University) scored when lefty Ryan Jones (JR, Ventura College) smashed a hard ground ball for a base hit, extending his own streak to a team-high 13 games, but the story of the day was mostly certainly Flanagan. The utility player led off the fourth with a solo shot to left-center field just to the right of the scoreboard, increasing the POWER lead to three runs. 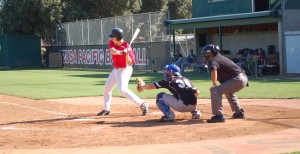 The Pirates finally scored in the bottom of the fourth on a sacrifice fly from C/RF Tim Helton, scoring NAIA gold glove first baseman John Erb who had reached on a single and stole a base to lead off the inning.

The POWER tallied an insurance run in the seventh when the powerful Austin Barrett (SO, Mercer University) led off with a hot shot line drive that hit the left-center field wall so quickly that he wasn’t able to take second, a sacrifice bunt from Gomez moved him over, and an RBI single from Evan Boyd (JR, Mercer University), his ninth run batted in, scored the POWER catcher. At the time, the run seemed inconsequential, widening the Pirate deficit to 4-1, but Nick Baker finally slowed.

After allowing just one run, scattering six hits, and inducing 12 groundball outs through the first seven innings, the Pirates put together three straight hits off the La Quinta native, including a big one—a two-run home run from the leadoff man Brent Warren, trimming the lead to just one run. Jose Garcia (SO, College of the Desert) would relieve Baker, getting a clutch 3-6 double play to John Erb, the only batter he faced, before handing the ball over to Tony Guerra.

No surprise what happened next; Guerra retired four of the next five Pirates he faced, getting two out on strikes, to slam the door on the Pirates and pick up his fifth save. It was the POWER’s second one-run ballgame of the season, and they have won them both.


Game two of the double header was a bit crazier. Two lead changes and another home run only begin to tell the story. The POWER began the game working full counts on four of the first five plate appearances, drawing two walks, and scoring the first run. Newcomer David Kiriakos (JR, Riverside City College) got his first POWER start and took advantage, leading the game off by singling and scoring a run on a passed ball. Kiriakos would single in Kenny Sigman (JR, South Mountain CC) in the second for his first RBI. The newly acquired POWER infielder would go 3-for-5 with a run and an RBI.

Ryan Santhon (JR, California State University, Los Angeles), getting his second start of the season, would allow a run in the second and then get derailed by an 18 minute delay when the lights at Cougar Stadium were turned on late. The wait cooled off Santhon, who had retired four batters on strikes in the first two frames; he allowed three runs in third with the big hit coming from John Erb, an RBI double that nearly made its way over the right-center field fence and the first hit the southpaw had given up to a left-handed hitter all season.

But unlike last night, Palm Springs would overcome the big inning. Flanagan and catcher Alex DeLeon (JR, University of Kansas) would smack back-to-back doubles in a three-run fifth inning, retaking the lead at 5-4, and Santhon settled in, retiring 10 straight Pirates from the end of the third into the sixth inning, before handing it over to the tall righty Casey McCarthy (JR, California State University, San Bernardino). Santhon finished with a poised 5.2 innings pitched, allowing four runs but striking out seven and allowing just two free passes. 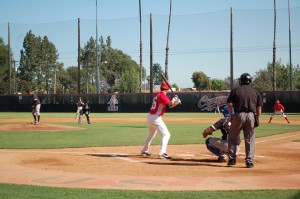 Flanagan was the star, with 2 HRs and 5 RBIs

The POWER would tack on a run in the seventh and eighth innings, but Manager Harry Gurley did not want to let the game slip away, as he brought in his closer for the second time in the same day to shut down the Pirates—this time, in the eighth inning in a 7-4 game. After Guerra’s first inning of work, Flanagan hit a three-run homer to deep right field in the ninth, his second of the day, this time an opposite field shot for the righty, but Guerra seemed unfazed by the change in situation.

“I knew I had to close that game, I closed the other one—it’s my job, and I took care of my job,” explained Guerra after the game. The flamethrower from San Pedro stayed on for the ninth and finished with two perfect frames, setting down five Pirates on strikes—picking up his sixth save of the summer and his second on the day.

Ryan Jones’ 13 game hitting streak came to an end in the second game of the double-header, as he struck out in a late pinch hit appearance. Jones was upbeat and optimistic despite his incredible streak coming to an end in a game where he only had one chance at the plate. “If the baseball gods let me keep it going then they did, and if not, I have to start another one tomorrow,” he said. Despite his team-leading .404 average, Jones eagerly volunteered to come in to take early batting practice early before Friday’s game with assistant coach Danny DiPace.

The wins improved Baker’s record to 4-0 and Santhon to 2-0. The POWER now stand high atop the SCCBL at 14-3 overall and 8-1 in conference games. The Pirates dropped to 6-6 overall and 5-5 in league play.

The POWER return to Palm Springs Friday to take on the San Francisco Seals at 7:05 p.m. for Pride Night. The gates will open at 6:00 p.m. All POWER games can be heard live on www.PSPBB.com, with select games simulcast on NewsTalk 920 KPSI Palm Springs. Also, be sure to check out our blog for more team information, including the lineups before every POWER game.