PALM SPRINGS, Calif. – The Palm Springs POWER evened the two-game series with the San Diego Force at one win apiece, defeating the Force Wednesday by a score of 5-3 at Palm Springs Stadium.

POWER starter Keaton Cenatiempo highlighted the victory with the first complete game by a POWER pitcher this year.

The POWER bats stormed back into gear tonight against San Diego’s pitching staff. Harry Shipley scored first after Cody Gaertner drove him in on a single in the first inning.

Gaertner drove in Shipley again in the third inning to tie the score at 2-2. The next batter, Connor Hornsby, brought in Dillan Smith on a sacrifice fly to give Palm Springs the lead. Later in the inning, Chad Clark added to the POWER lead by smacking an RBI double down the left field line, scoring Gaertner.

The POWER added another insurance run in the seventh inning, when Smith scored on a wild pitch by San Diego pitcher Christian Cox.

In the ninth, Cenatiempo struck out the side to clinch the victory. He moved his record to 2-0 this season..

Palm Springs improved its conference record to 2-2 and its overall record to 7-4. They will be back in action Friday at 7:05 p.m. when they start a three-game home series with Top Speed at Palm Springs Stadium. 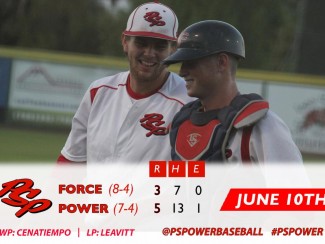