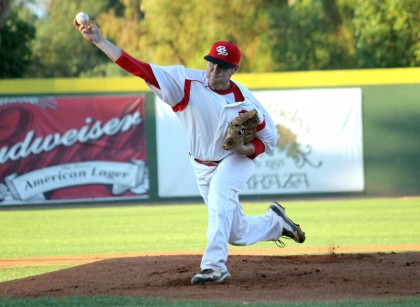 PALM SPRINGS, CA – Matt Anderson pitched his third-straight complete-game shutout on Tuesday night as the POWER (32-6, 15-4) defeated the Sabers (16-12, 10-7) 6-0 at Palm Springs Stadium. With the win, the POWER clinched the No. 1 seed in the upcoming Southern California Collegiate Baseball League championship series.

Anderson (5-1) extended his scoreless streak to 29 innings while striking out 18 batters. His stellar night brought his season strikeout total to 74 breaking the POWER’s franchise-strikeout record previously held by Ryan Santhon.

Todd Dunham did most of the damage on offense for Palm Springs going 2-for-4 with two runs, an RBI and five stolen bases.

Game two of the series is tomorrow at 7:05 p.m. on Dollar Admission Night at the ballpark.