A farewell sendoff for the 2021 Palm Springs Power 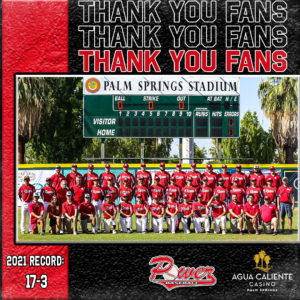 Palm Springs – The Palm Springs Power finished the 2021 season with a 17-3 record, for the seventh highest win percentage in team history. It marks seventeen straight winning seasons since the Power’s inception in 2004.

The Power began their summer red-hot on opening night with a 10-0 victory over the Orange County Legends on June 11, led by Izayah Alvarez who drove in a season high five runs on three hits. The Power went on a hot streak to begin the year, winning six straight contests from June 11 to June 22. In those six games, Palm Springs scored eight or more runs in four of them. As a team, the Power hit .315 during the season opening streak.

Emerging early as a team leader was everyday centerfielder Bryan Leef. Leef chalked up hits in five of those first six games, eventually picking up at least one hit in 15 of the 16 games he appeared in. During the streak, Leef went 7 for 21 (.333). His power numbers continued to grow as the season went on as he led the team in home runs (2), and RBI (24).

Palm Springs eventually suffered their first loss on June 23 against the San Diego Waves with an extra inning 10-7 finish. After leading 6-4 through the first six innings, the Waves stormed back to outscore the Power 6-1 in the final four innings. However, it didn’t take long for Palm Springs to bounce back.

Following their first loss, the Power came back  two days later to shut down the OC Pirates with a 10-6 win to begin another streak, this time stretching ten games (season long). In the midst of the streak, the Power swept a two-game series against the rival San Diego Force including an 11-2 victory on June 30 to end the month. The Power bullpen of Sakemi Sato and Nick Beardsley tossed five shutout innings while striking out eight batters in the process.

The month of July proved to showcase a flourishing offense. Including the final two games of June, the Power offense scored eleven or more runs in nine of ten wins, capping 16 runs in back-to-back ball games July 2 and 3, 18 runs on July 7 against the Inland Valley Bucs, while reaching it’s apex with 21 runs on 15 hits against the SoCal Halos on July 9.

During the 21-run ballgame, six different players tallied multi-hit performances, including Ryan Rodriguez and Jacob McCaskey who dazzled with three-hit games. The Power would sweep the two-game set, outsourcing the Halos 32-17 over the weekend.

The Power fell in two of their final three games, but saw plenty of success over the course of the twenty-game season. Twenty games is the shortest season in Power history, with scheduling affected by the COVID-19 pandemic. Still, the Power saw two players move on to bigger baseball immediately after the season. RHP Jamison Hill from Fresno State pitched in two Power games on June 29 and July 2, eventually signing as a non-drafted free agent with the Arizona Diamondbacks. The aforementioned Leef from the University of the Cumberlands signed a professional contract with the Missoula Paddleheads, now-MLB partner in the Pioneer League.

The 2021 season, while shortened, will remain a fixture in the minds of Power fans throughout the Coachella Valley. It will be remembered as one of the most potent offenses in recent memory with Mark Kirkland, Deshawn Johnson, Casey Kleinman and Josh Hernandez backed by a solid cast of arms including Eric Telarroja, Brett Finnel and Dom Mota amongst many others who struck out 188 batters while walking just 89.

The arms race was aided by a new format in 2021, which used the Power Summer Collegiate League (PSCL) as a training ground and sort-of minors-style system to feed the Power roster. The system allowed twelve different pitchers to toss a single outing for the Power to showcase their skills against a higher level of competition.

The Power will go into hibernation until Palm Springs Stadium will once again see baseball this winter for California Winter League play, followed by another PSCL and Power season in the summer of 2022. The Power players and staff would like to thank the Palm Springs and surrounding communities of fans who supported the team during the summer of 2021 and look forward to having cheers back in the ballpark once more very soon.

POWER Fall to Knight Hawks 2-1 to Wrap Up Season 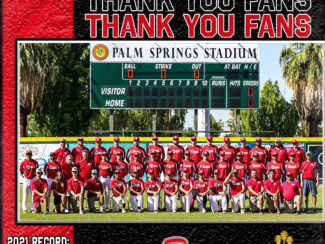