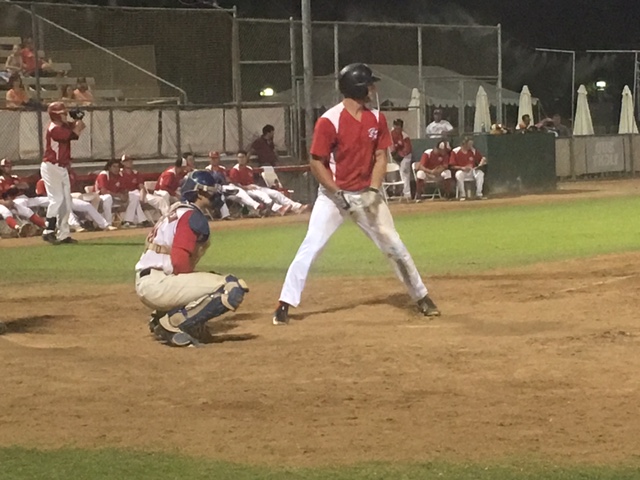 PALM SPRINGS, Calif. – If the POWER were worried about their offense before this critical series with the Buccaneers, they most definitely aren’t concerned anymore after dismantling Inland Valley 14-3 and outscoring them 29-9 in the last two games.

BYU outfielder Brock Hale went 3-for-6 with three RBI and two runs scored after being propelled to the lead off role this evening. “It was a little bit of a change, but you know, you just have to (be prepared for everything),” Hale said to Clinton Cole who caught up with him after the game. “We’ve got two games on the road, we have to have the same mindset we’ve had the last two games and not let up.”

Baton Rouge Community College outfielder John Mauldin had a big day not just at the plate but on defense as well, with first inning assist at the plate from deep center field in a great display of arm strength and athleticism as he had to show his range to make the catch.

The POWER bats were hot all night, to the tune of 18 hits and putting up six runs in the 4th inning as they batted around. Riverside City College’s Ryan Mota had two big singles and a run scored in the decisive inning.

College of the Desert right-hander Jumpei Akanuma took the hill for the POWER, tossing seven innings and only allowing three runs while striking out six. He improved to 4-2 on the year in his sixth start and eighth overall appearance. Loyola Marymount’s Alex Strizak would come in for the final two innings to finish off the 14-3 victory for the POWER.

Palm Springs will be back in action tomorrow on the road, as they head to Cal Poly Pomona for a doubleheader against these same Inland Valley Buccaneers. Game one is at 3:30 PM PT and game two is scheduled for 7:00 PM PT, you can catch all of the action on palmspringspowerbaseball.com!

The POWER will return home on Friday in a non-conference season finale against the San Diego Waves at 7:05 at Palm Springs Stadium.