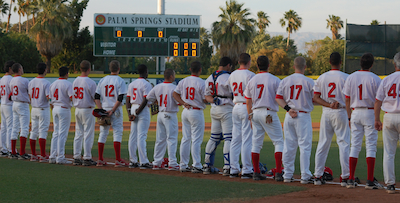 PALM SPRINGS, CA — The 41-4 Palm Springs POWER finished the season ranked 16th in the nation in the Summer Collegiate Team Rankings, up from their previous rankings, according to Perfect Game USA, the recognized leader in high school and college level scouting and ranking.

The POWER finished with the highest winning percentage (91%) in the final top 50. This year’s spot for the POWER marks their highest spot ever in the Perfect Game Collegiate Summer League rankings. Palm Springs finished just outside the Top 30 in the 2010, but the POWER caught the nation’s attention from the outset of the 2011 season. 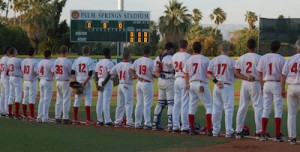 Building off of last year’s success, the POWER spent most of the early season just outside the Perfect Game Top 25. On July 7, 2011, Palm Springs cracked the Top 25 for the first time in 2011, in the midst of their franchise-record setting 20-straight victories.

From there, the POWER quickly shot up the rankings, sliding up to 18th the next week before finishing the season just outside the top 15 at 16th.

The POWER look to build off of their 2011 success with an exciting 2012 season next summer! Until then, don’t forget about the California Winter League–your best chance to catch elite baseball in the Coachella Valley until the POWER return to the diamond next June. Until then, be sure to follow the POWER on Facebook and Twitter!