POWER Edge Waves in Face Off Of Champs 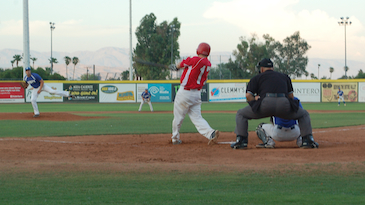 PALM SPRINGS, CA – The OC Waves, who won their league championship on a two-run walk-off home run last night in Irvine, played a back-and-forth contest with the SCCBL Champion Palm Springs POWER and fell just short, 8-7, as the POWER won their 41st game of the summer.

On “Christmas in July” night at the stadium, fans received quite a gift from the POWER players. With a handful of players already gone due to previous schedule commitments, the rest of the squad stepped up their game, while having fun in the process.

Chett Zeise (SR, University of Iowa), co-captain of the team, started the game on the mound but walked the only batter he faced.  Rob Ross (SR, Vanguard University), who was at first, traded places with Zeise.  Zeise continued to play every position on the field throughout the ballgame. 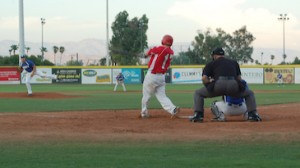 Chett Zeise rips a double in the third inning. Zeise appeared at every position in the field in Friday night's game against the OC Waves.

The Waves scored one in the first and three in the third to take a four-run lead. Palm Springs, who has shown resilience many times this season, plated two in the bottom of the third, one in the fourth, and three more in the fifth to take a 6-5 lead.

But that lead was quickly erased in the top of the sixth, when Waves pinch-hitter Nick Garza tripled in Dylan Fitzgerald and then scored on an Ian Sakry RBI-single to give Orange County the 7-6 advantage.

One of the highlights of the evening also occurred in that frame, when POWER assistant coach and all-time franchise leader in hits P.J. Jimenez, who entered the game as a pinch hitter and stayed in to play second base, started a double-play with Zack Haley (SR, Liberty University), who currently attends Jimenez’s alma mater, Liberty University.

Alex DeLeon (JR, University of Kansas) gave the POWER the lead for good in the seventh, when he drove a ball into the left-center gap to score both Ryan Jones (JR, Vanguard University) and Jose Garcia (SO, College of the Desert).  De Leon’s double was his franchise-record 11th double of the year, which put Palm Springs ahead 8-7.

Ryan Santhon (JR, Cal State Los Angeles) extended his single-season strikeout record with four K’s in his two innings of relief (he now has 65), and Tony Guerra (JR, Cal State San Bernardino) pitched the ninth to record his ninth save of the year, breaking the previous POWER single-season mark of eight set by Bryan Shaw in 2006.  Shaw is currently a reliever for the Arizona Diamondbacks.

With the tying run at third and the go ahead run at second base for the Waves, Jimenez stayed with a tricky bounce on a ground ball to second and relayed it to first for the final out. The win, the 41st of the season, extending the new franchise record for victories in a season.

The Home Run Derby and All-Star Game between the Orange County Collegiate League and the Southern California Collegiate Baseball League will take place Saturday evening at Palm Springs Stadium, starting at 6 p.m.  Both events can be heard live on www.PSPBB.com.