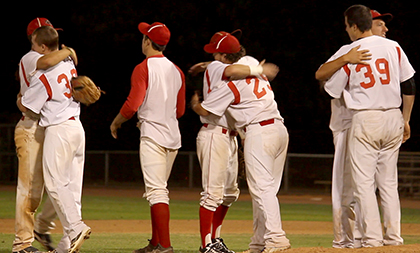 The championship is the second straight for the POWER, who swept the East LA Dodgers 2-0 last year.

Palm Springs trailed 1-0 heading into the bottom of the first inning, but pounced on Waves starter Tito Paez to score four runs. Paez walked three batters, including two with the bases loaded, and hit another. T.J. Bennett owned the only hit of the inning, singling to bring in a run. Paez recorded just one out before being removed.

With their lead trimmed to 4-3 entering the bottom of the fourth inning, the POWER bats rallied for four more runs. With the bases loaded and two outs, Jake Howeth belted a pitch off the right field wall, clearing the bases for a 7-3 lead. Howeth would score when Waves second baseman Brian Sothern misplayed a Reagan Fowler groundball for an 8-3 advantage.

Bennett would add the final POWER tally in the sixth inning, stealing home on a delayed double steal.

Relievers Mark Lukowski and Anthony Torres kept the Waves bats in check before handing the ball to Pete Reyes to close out the ninth. Reyes surrendered a two-out single but induced a groundout from Waves shortstop Darrell Hudson to end the game.