Power and Pitching Propel Palm Springs Past Thrashers in Doubleheader

AGOURA HILLS, CA – The POWER won their franchise record setting 18th consecutive game, winning both games of a road doubleheader against the LA Thrashers, winning the first game 2-0 and 8-6 in the record-breaking game two. 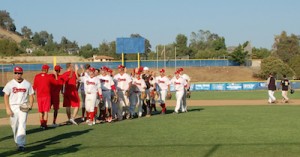 The POWER celebrate, capturing both games in the doubleheader, improving to 4-0 on the road in 2011

James Crockett (Grad., Southern Utah University) tossed a gem in game one for the POWER. Crockett threw eight shutout innings and struck out eight Thrashers, setting a season high for himself and putting up the most Ks by a POWER starter this season. He allowed only four hits and dished out only two walks, facing only five batters over the minimum. The only runs of the ballgame came in the fifth, on a two RBI single from Justin Cureton (JR, Indiana University).  Josh Pond (SR, California State University, San Bernardino) closed the door on the Trashers, as the 6’6” righty threw a perfect ninth for his first POWER save. With the win, Crockett improved to 1-1.

The Trashers led most of the way in game two, scoring two runs in the first and two in the third. The POWER would not give up, as they muscled a run in the third on the second home run of the summer for Ryan Garvey (FR, University of Southern California), a monster shot to right-center field. Garvey played his first game at third base for the POWER and went 3-for5, finishing a homer away from the cycle. Starter Chris Licon (JR, Vanguard University) settled in for the POWER, retiring the last eight batters he faced in his six inning start.

The flood gates opened in the sixth. POWER shortstop Evan Boyd (JR, Mercer University) followed Garvey’s example, hitting a solo shot to the same part of the ballpark. A Garvey triple kept things going for the POWER, and after Palm Springs made it 4-3, the POWER put put together six consecutive base runners on five singles and a walk, all with two outs, to finish the half inning with the 8-4 lead.

Things got slightly dicey in the ninth, but POWER closer Tony Guerra (JR, California State University, San Bernardino) got the one out save in the ninth, relieving Ryan Santhon (JR, California State University, Los Angeles), to put away the Thrashers by the final tally of 8-6. Starter Chris Licon picked up the win, his fourth of the season, to improve to 4-0.

With the record tying and setting back-to-back wins, the POWER picked up their 30th win of 2011, extending their first-place lead in the SCCBL with their 15-1 league record and 30-3 overall record. The POWER return to action at Palm Springs Stadium with home games Tuesday and Wednesday nights against the SD Waves and Arroyo Seco Saints. First pitch for the home games will be at 7:05 p.m., with the gates opening at 6:00 p.m. All POWER games can be heard live on www.PSPBB.com, with select games simulcast on NewsTalk 920 KPSI in Palm Springs, including both Tuesday night’s and Wednesday night’s ballgames. Also, be sure to check out our blog for more team information, including the lineups before every POWER game.