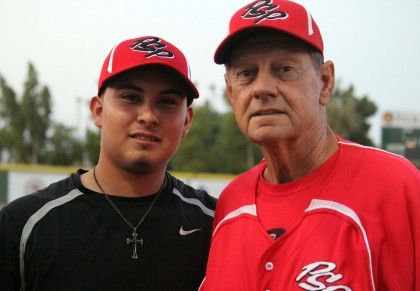 PALM SPRINGS – Two past POWER players signed professional contracts this past week, as Edgar Gomez and Cortland Cox joined the growing number of Palm Springs-alumni in the professional ranks.

Gomez inked a contract with the Tampa Bay Rays as an undrafted free agent. The right-hander recently completed his sophomore year at Riverside City College, where he went 9-1 with 2.00 and 46 strikeouts over 76 1.3 innings. In 42.1 career innings with Palm Springs, Gomez went 6-0 with seven saves and posted a 0.43 ERA while striking out 58.

Cox signed his deal with the Cleveland Indians after being selected in Round 32 of the 2013 MLB Amateur Draft. The Alta Loma-native, a freshman at RCC this past season, went 4-3 with two saves and 33 strikeouts while posting a 2.10 ERA in 58 1/3 innings. In his only appearance with the POWER, Cox threw two scoreless innings and struck out two.