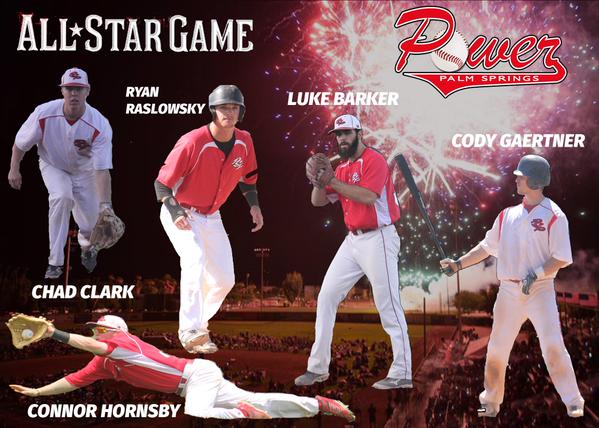 Despite a torrential downpour throughout the day, the SCCBL All-Stars were able to overcome conditions to beat the OCCL by a score of 7-4.

Only halting minutes before the delayed 7:15 first pitch was the rain, but extensive work from the grounds crew at Palm Springs Stadium allowed the ballgame to be played. The helpless runners could be likened to Smarty Jones on basepaths that looked like the track at the 2004 Belmont Stakes in the early going, especially the first inning.

Three POWER players started the game in the field for the SCCBL. Ryan Raslowsky played second base and Cody Gaertner was behind the plate, catching for POWER ace Luke Barker. He pitched a perfect top of the first, using just 11 pitches to strike out the side.

Most of the scoring was done in the bottom of the first for the SCCBL. Raslowsky led off for the SCCBL, and he lined a double down the left field line. The second batter, Cole Gray of the OC Riptide, walked, bringing up Cody Gaertner. Gartner singled to load the bases. Raslowsky would have scored had his spikes found some traction as he rounded third base, but had to hold up. It was irrelevant, as Riptide’s Caleb Henderson singled to open the scoring, with Raslowsky coming in.

Inland Valley Pirates designated hitter Nick Hernandez walked to bring in another run (Gaertner), followed by a single from his club teammate Kyle Jackson. That made it four-nothing, and the San Diego Force’s Alex Cruz doubled to bring in two more runs.

Six-nothing is what the score would remain until the top of the third, when a lined shot off the bat of Alonzo Paulino from the LA White Sox cleared the wall in left-center field to put the Orange County Collegiate League on the board with two runs. It was the first home run hit at Palm Springs Stadium all year.

Adding another run in the sixth inning were the OCCL, and they made it a 6-4 game in the ninth inning. The rally fell short, but the bottom of the ninth was played anyways in order to allow these players who traveled from all over Southern California to get some game action.

Connor Hornsby scored the final run of the game for the SCCBL. He singled to reach base, scoring when the Force’s Kalani Brackenridge hit into a fielder’s choice. The POWER right fielder had entered in the sixth inning, walking in his previous at bat in the seventh.

Keaton Cenatiempo and Chad Clark were selected for the SCCBL, but did not play in the game.

Monday is the first day of the postseason, and the POWER travel to Pomona for game one against the Inland Valley Pirates. Games two and three will be at Palm Springs Stadium.