Jonathan McCray, a member of this year’s POWER squad, was selected by the Kansas City Royals in the 24th round of the draft. McCray earned All-American and first-team all-Foothill Conference honors in his freshman season at San Bernardino Valley College. The second baseman from Riverside finished the 2015 season with a .383 batting average and a .450 on-base percentage.

Four former POWER players were also drafted by major league teams Wednesday. 2014 POWER shortstop Scotty Burcham went to the Colorado Rockies in the 25th round of the draft. Burcham played his college ball at Sacramento State University and had a .292 batting average and 16 RBI for the POWER last season. He batted with a .329 average with four homers and 33 RBI in his senior season at Sacramento State. The La Quinta native finished second in program history with 235 hits over his four years.

The draft featured three players from the 2013 POWER roster. Pitcher Jackson McClelland from Pepperdine University went to the Toronto Blue Jays in the 15th round. McClelland, a native of Beaumont, impressed in his junior season at Pepperdine, leading the team with a 2.93 ERA in 15 starts. His performance this past season earned him a spot on the all-West Coast Conference second team. He also pitched well for the POWER in 2013, posting a 2.88 ERA in 5 starts and 5 relief appearances.

In the 17th round, the Tampa Bay Rays picked shortstop Brett Sullivan out of the University of the Pacific. Sullivan hit .338 for the POWER in 2013 with 25 RBI and led the team with four triples. Sullivan, a Stockton native, posted a .275 batting average this past spring and led Pacific with seven home runs and 28 RBI. Sullivan’s older brother and teammate, Tyler, was selected as well, going in the 14th round to the Chicago White Sox.

The New York Yankees selected San Diego State’s Mark Seyler, another former POWER pitcher, in the 19th round. As a junior for SDSU, Seyler earned first team all-Mountain West honors and led the conference with nine victories. The right-handed pitcher from Agoura Hills also placed third in the Mountain West in ERA and strikeouts. With the POWER in 2013, he had a 3-0 record and a 3.21 ERA, allowing just a .207 opposing batting average.

With five players drafted in 2015, 87 former POWER players have now been drafted by major league teams since 2004. Burcham joined four other players from the 2014 POWER team that were taken in past drafts. McClelland, Sullivan, and Seyler became the 6th, 7th, and 8th players from the 2013 squad to be selected in the draft. 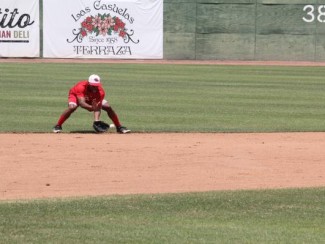