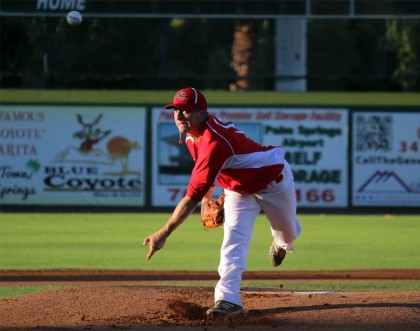 PALM SPRINGS, CA — With first place on the line Tuesday night, the Palm Springs POWER rose to the occasion and blanked the Long Beach Legends 6-0 at Palm Springs Stadium.

POWER starter Kyle Crawford finished just one out shy of a complete game shutout, exiting with runners on first and second with two outs in the ninth inning. Edgar Gomez came on and recorded the final out, pushing the POWER (18-1, 7-1) ahead of the Legends (20-9, 6-1) atop the SCCBL standings.

The POWER have now posted back-to-back shutouts and have not allowed a run in the last 20 innings.

Crawford (5-0) scattered six hits while walking two and striking out six. He retired eight in a row before giving up back-to-back singles in the ninth inning and exiting to raucous applause.

The POWER opened up the scoring in the second inning. Jake Howeth singled with one out, stole second base, and scored on Mark Lindsay’s single for a 1-0 lead.

Palm Springs tacked on another run in the fifth inning. Ryan Raslowsky walked with one out and stole second. After Eric Urry lined out, T.J. Bennett singled to drive in Raslowsky.

The POWER broke open a close game in the seventh inning, scoring four times on three hits. Bennett got the frame started with a double, and stole third on the same pitch Anthony Lombardo walked. Jared Theisen pinch-ran for Lombardo and promptly stole second. Howeth followed with a single to score Bennett and push Theisen to third. Ryan Jones then walked and Lindsay brought Theisen in with a sacrifice fly. Michael Massi eventually plated both Howeth and Jones with a single to increase the lead to 6-0.

James Roll (2-1) took the loss for the Legends, allowing two runs in five innings of work.

The POWER and Legends clash again Wednesday night at 7:05pm, with the winner moving into first place. It will be Dollar Admission Wednesday, with all tickets just $1. Fans that can’t make it to the game can listen online at pspbb.com.