PALM SPRINGS, CA – Nick Baker (SO, California State University, Chico) was brilliant Wednesday evening for the POWER, as he tossed a complete game shutout, the first complete game for the POWER since 2009, as the POWER beat the Azusa Pirates 8-0 at Palm Springs Stadium. The win improves the POWER to 19-3 overall and 10-1 in the Southern California Collegiate Baseball League play. It was the POWER’s 7th win in a row and 18th in 19 contests. It also captured the season series for the POWER over the Pirates who, after losing the first ballgame of the series, won the final three games.

Kevin Verdeja snagged a win for the Pirates last Wednesday, but tonight would not be his night. David Kiriakos (JR, Riverside City College) and Evan Boyd (JR, Mercer University), the first two POWER batters, both scored, as Palm Springs struck for two runs in the first inning off of the Pirates’ starter, and it would be more than enough for the victory. The POWER grabbed insurance off of Verdeja with two two-hit innings in the third and fifth, and tallied three in the bottom of the eighth off of Pirate reliever Austin Cheek.

Throwing his first complete game since high school, Baker said it brought him back to his days at Palm Desert High School: “tonight takes me back to last year when I pitched in front of hometown crowds for a state championship. I had a lot of old coaches, classmates, and friends on hand tonight, so that was pretty special.”

Baker’s right arm was the truly special sight of Wednesday’s ballgame, as the youngster allowed just five hits and walked one, getting seven Pirates out on strikes and piling up an astounding 16 outs on groundballs—a career high for him. Baker pounded the strike zone with a wicked fastball that moved around on hitters all night. Tossing an even 100 pitches on the night, the righty threw an incredible 74 for strikes, but the POWER pitcher was quick to give the credit to his teammates: “my fastball was really moving tonight, but I just wanted to get the ball on the ground. I had a really great defense behind me tonight, and I just let them make plays,” Baker noted after the game. The sophomore made a brilliant defensive play of his own, a leaping backhanded snag on a comebaker in the seventh off the bat of Pirate right fielder Tim Helton. 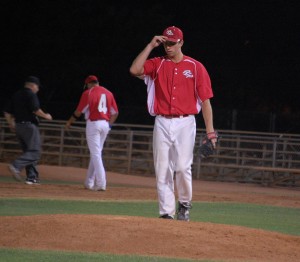 Baker only flirted with trouble once, the fourth inning, when he allowed the bases loaded on a walk and back-to-back singles. The groundball out came to rescue, however, as Baker induced a 4-6-3 double play, one of two the POWER defense made in the ball game. The win moves Baker to 5-0 on the season in as many starts.

The night certainly went to Nick Baker, but co-captain Marcus Romero (SR, Southern Utah University) had a nice evening as well, going 2-for-4, with a walk, a run scored, and an RBI—not to mention a brilliant catch on the run in left field to end the ball game.

The POWER play their next game Friday evening, at home against the Inland Empire Aces, an SCCBL opponent, and the first of a two-game series. It will be Cheerleader Night at Palm Springs Stadium. Fundraising efforts that night will be contributed to the Palm Springs High School cheerleading program. First pitch will be at 7:05 pm, with the gates opening at 6:00 pm. All POWER games can be heard live on www.PSPBB.com, with select games simulcast on NewsTalk 920 KPSI Palm Springs. Also, be sure to check out our blog for more team information, including the lineups before every POWER game.