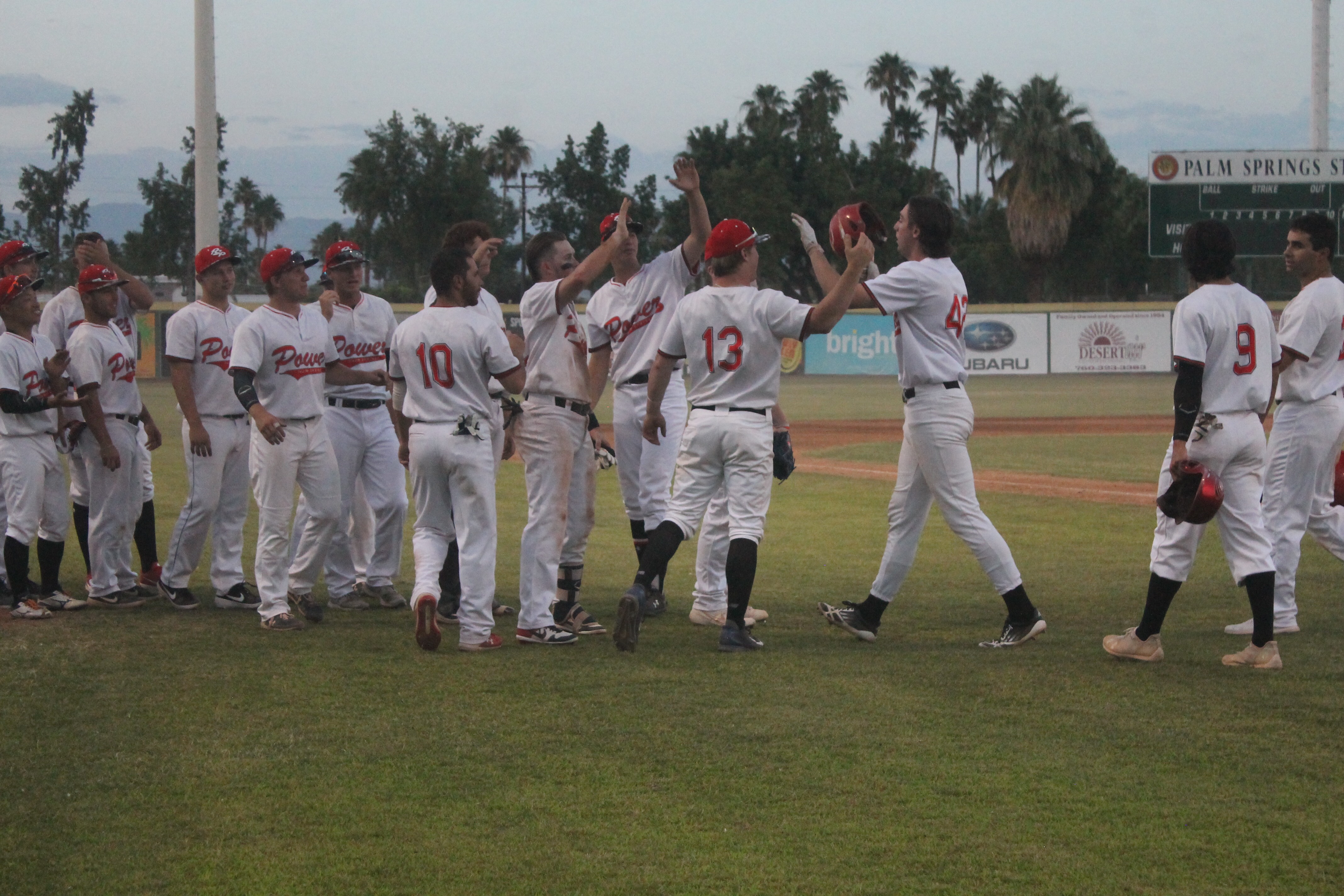 The Palm Springs Power come into Tuesday topping the Southern California Collegiate Baseball League leader boards in every hitting category. Hobbs Nyberg has played in 18 games, and has posted a .404 batting average, a team high. The second baseman from Brigham Young University has five doubles, two triples, 14 runs batted in, and has crossed the plate 14 times.

Jayden Kiernan, the catcher from Utah, leads the team with two homeruns on the season with six doubles and 14 runs batted in.

Outfielder, Matt Green, leads the Power with 18 runs batted in, with eight doubles, and one triple. Green has crossed the plate 14 times this season.

While these three are key pieces to the Power’s Offensive lineup, collectively the Power have scored 195 runs on 244 hits, notched 149 runs batted in, recorded seven homeruns, 49 doubles, and 13 triples.  The Power are hitting for a combined .325 team batting average.

Pitching has been lights out for the Power also. The staff has a combined 2.05 ERA, and held opponents to a .237 batting average.  The Power have recorded 217 strikeouts in 180.0 innings.

Power Manager, Casey Dill said he is preparing for this game just as he would any other. He added, “ This is going to be a great baseball event for the entire organization.”

The Palm Springs Collegiate League is in their second year of operation, with their collegiate summer season running from June 6th – July 10th. Current collegiate athletes, uncommitted players, and graduating seniors from all over the country come to the PSCL for the unique experience and to work with the veteran coaching staff from all levels of play.

The Chill are having a remarkable season lead by manager Andrew Clark. Clark comes right off an amazing CIF Southern – Section Championship season as the head coach for Xavier College Prep in Palm Desert. This 2019 season is his first with the Palm Springs Collegiate League.

The Chill come into Tuesday night’s showdown sitting on top of the PSCL standings with a 12 – 0 record.

Outfielder, Bryan Leef, has 12 hits in 10 games played. Leef has recorded two doubles, one triple, two homeruns, and has nine runs batted in. The junior from the University of the Cumberlands is hitting .462 at the plate. He has also recorded six stolen bases.

Joseph Howell, the outfielder from Whiteworth University has also come up big for the Chill. Howell has recorded 15 hits, with three runs batted in, and four stolen bases.

Having fun is the game plan for manager, Andrew Clark. He adds, “ I’m not sure how it came about, but we want our kids to compete at the highest level. We are very thankful that we have the chance of doing so against the Power tomorrow.”

“ We have had a rough week, with playing six games. Today was an off day, giving our guys a chance to recharge.  Tomorrow we will take batting practice at the field and just remind our guys that this is a game. They have been given the opportunity to take on the Power and we are taking it as a blessing.”

Power Manager, Casey Dill notes, “ The Chill are a very good baseball team. They don’t make mistakes and don’t beat themselves.  They are going to come out and match up against the Power and compete. It’s going to be fun to see the two different styles of baseball and the competition surface. “

He adds, “ I am very proud of the Chill for the season they are having and how they have conducted themselves on and off of the field. I am looking forward to a well – played, hard fought game, between two very talented baseball teams. “

Owner and President of the Palm Springs Collegiate League as well as the Palm Springs Power, Andrew Starke agrees with Dill adding, “ Tuesday will be a great day for the Power family as all of our talented players on the field will get to compete in a fun atmosphere to entertain all of our greater Palm Springs area fans.”

Make sure to come out to Palm Springs Stadium to catch the local baseball action for $2 Tuesday, where all hot dogs, sodas, and Bud/Bud Light Pints are just $2. First pitch is at 7:05pm, gates will open at 6:05pm.