PALM SPRINGS, CA – Zack Haley, the Palm Springs POWER’s slick-fielding and unassuming second baseman, sports a .343 batting average and a team high .459 on-base percentage on his stat line—for the 2010 season. One of four returning POWER players from the 2010 campaign, Zack Haley’s 2011 summer season has not begun as planned. 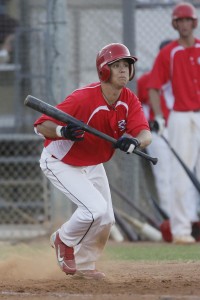 Zack Haley, one of the most versitile POWER players, has made his way back to the lineup (Photo Courtesy of Joseph Tames)

After Haley helped lead his college team, Liberty Flames, to an 18-9 Big South Conference record, good for the second seed in the tournament, the 5’9” middle infielder took his lead off of second base in the third inning of Liberty’s first round game as the Flames took on Garner-Webb.

Haley’s teammate Michael Robinson hit a fly ball to right field, Haley ventured his way back to second, ready to tag up and make into the third. The ball hit the mitt, and Haley churned his legs, trying to beat the throw into third. Throw. Slide. Tag. Ouch.

Not only was he out on the play but the Prescott, AZ native’s right pinky was also seriously injured. As he walked off the field, third base coach Jason Murray pointed to Haley’s pinky. As Haley looked down, he noticed his now dislocated pinky, making a nearly 90-degree angle.

The Liberty coaching staff lifted Haley from the ballgame, as they popped the pinky back in, but he refused to sit the next game. Or the game after that.

Haley played in all four of Liberty’s games but struggled. A .284 hitter during the regular season, Haley collected just one hit in eight at bats and reached base only twice—not exactly normal production from a guy who got on base nearly 40% of the time this year for the Flames.  Liberty was knocked out in the second to last day of the double-elimination tournament by the eventual runners-up, Garner-Webb.

Haley missed the opening weekend of the POWER season for the Big South tournament, but he returned in time for the beginning of league play in the Southern California Collegiate Baseball League (SCCBL). Haley’s finger wasn’t fully healed, however. He had limited mobility of his pinky, trouble gripping the bat and driving through the ball, and in five starts hit just .211. The nearly everyday starter for the POWER in 2010 started losing playing time to the surging Curtis Gomez out of the University of the Pacific.

Haley made the trek home to see a hand specialist to have the finger looked at again.  After a suggested two weeks off, he was back in the cages after twelve days, but even now still doesn’t have normal mobility in the finger because of torn tendons he suffered on the slide, making it difficult for him to clench his whole hand.

Despite his relative discomfort, Haley remains determined to make an impact in the POWER lineup. Manager Harry Gurley said, “It’s not totally healed, but he wants to play, so we will let him play,” and sure enough, just three days after he began to swing a bat again, Haley was inserted into the starting lineup Tuesday night against SCCBL foe the East LA Dodgers. 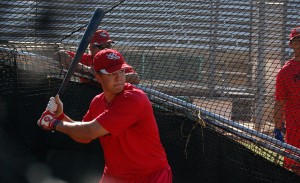 Baker working his way back in the cages (Minda Haas / POWER)

As far as the finger, it hurts Haley “whenever it bends”—essentially, anytime he does anything on the baseball field. Brushing off the pain Tuesday night, Haley went 1-for-3 with a walk, two runs, and two steals—this time, Haley slid in feet first: “I’ll probably [slide] feet first, but sometimes reactions just take over,” Haley said of future slides this summer. Haley said the pain is certainly still a factor, but that there is nothing he can do: “it’s pretty sore, but that’s how it’s going to be,” and he is unconcerned of aggravating or worsening the injury.

In order get in the game, Haley will have to contend with a deep POWER roster in addition to the pain. Even the hot-hitting Curtis Gomez has started to share playing time, as newcomer David Kiriakos, a junior from Riverside City College, is hitting an even .500 in his first four starts.

Adversity is nothing new for Haley, however, who made the POWER last season during the open tryout and fought for playing time then as well. Yet despite the depth at second base, according to Haley, there is no adversarial rivalry between the three second basemen. Co-captain Marcus Romero describes Haley as someone “who tries to make himself the best player he can be. Everyone thinks is a great guy to be around…there is no rivalry.”

Haley just wants to win and isn’t concerned about his at-bats: “we are all good players, and we will all get in there at times.” As a player who won two conference titles for Yavapai College before heading on to Liberty and was part of the POWER team that finished first in the regular season in the SCCBL last season, Haley knows how to win. 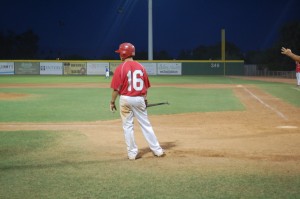 With a deep POWER infield, good clubhouse chemistry, and a gritty player in Haley returning to action and having solid performances like Tuesday night, POWER fans are sure to wins, no matter who is holding down second base.