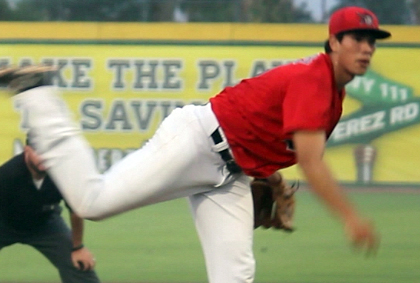 PALM SPRINGS, CA — The SCCBL  beat their all-star counterparts from the OCCL by a score of 1-0 in the 2014 All-Star Game at Palm Springs Stadium on Saturday.

Starting catcher Christian Kelley (Inland Valley Pirates) provided all the offense for the SCCBL in the first frame. After hustling out an infield single, Kelley went to second on the walk by Nick King (Palm Springs POWER). Two batters later, with one out and two men on, Collin Nyenhuis (Team San Diego) hit a ground ball that was thrown away by Harrison White scoring the SCCBL all-stars one and only run.

Kelley’s run would be the only one support the staff would need as they allowed just two hits in the ballgame.

Eight SCCBL pitchers combined on the shutout with Alex Mistuloff closing it out for the two-inning save.

The POWER are back in action tomorrow against the FBA Sharks. First pitch is scheduled for 7:05. Tomorrow is also a give away night as the first 200 fans will receive a POWER t-shirt.