PALM SPRINGS, CA — The Southern California Collegiate Baseball League beat the All-Stars from The Orange County Collegiate League on Saturday, 3-2, in walk-off fashion from a solo home run from Ryan Jones (Palm Springs POWER) in the bottom of the tenth inning.

The SCCBL/OCCL Home Run Derby dazzled the fans before the game, and Ryan Garvey’s (Palm Springs POWER) record-setting 10 derby home runs set the tone for the early innings. The OCCL All-Stars scored twice in the first half inning off of ten-game winner Nick Baker (Palm Springs POWER) on a two-run home run from OCCL MVP Scott Stidham (OC Waves). Palm Springs POWER second basemen David Kiriakos came around to score after a walk, a stolen base, a wild pitch, and a ground out from Joel Licon, the starting shortstop from the So Cal Athletics. 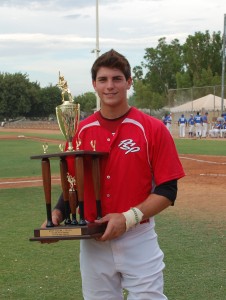 Ryan Garvey hit a record 10 home runs in the derby

The SCCBL scored another in the bottom of the third on a sacrifice fly to center by Marcus Romero, scoring his POWER teammate David Kiriakos, his second run of the ballgame.

In the bottom of the tenth, Ryan Jones, who played the whole game as the designated hitter, lead off and took a 2-2 pitch to deep right field for a huge walk-off bomb, the first walk-off hit of the POWER for the season and the first of Jones’ career. “The first base coach from the Thrashers told me to get a hold of one, to hit one for him–just to end the game. I was just looking for that pitch, and I got it,” said Jones in an interview after the ballgame. His first career walk-off homer ended an incredible season for the POWER first baseman, who described 2011 as a “summer that changed my life.” Vanguard University will be lucky to have Jones, along with four other POWER players: Hank Yates, David Kiriakos, Frankie Torres, Scott Simmons. 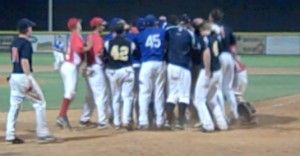 The All-Star game was a thrilling conclusion to an incredible season here in Palm Springs. The Palm Springs POWER went 41-4, finishing the regular season as SCCBL regular season champs and beating the So Cal Athletics for the outright crown of the league. It was the POWER’s third SCCBL championship, the third in five years for the club.

Thanks to all the SCCBL, OCCL, and POWER fans for their support this season here in Palm Springs. Have a great fall and winter and we will see you out here for the ninth season next season!

POWER Edge Waves in Face Off Of Champs