PALM SPRINGS, Calif. – The Palm Springs POWER took down the first-place Orange County Riptide behind a monster 5-for-5 night by Ryan Raslowsky who had three doubles, two singles, an RBI and two runs scored to earn their 10th win of the year.

The first inning got a fiery start as manager Harry Gurley was ejected after Harry Shipley was called out on a close play at first base. This sparked some POWER offense as Ryan Raslowsky drove the very next pitch into right-center field for a double. Miles Bice would follow by drawing a walk and both would come around to score to take the early lead.

Orange County would answer back to tie the game at two in the second inning, but the POWER would regain the lead in the third as Miles Bice would added to his RBI total by driving in Ryan Raslowksy with two outs.

Another run would be scored by Daniel Sander on a two-out single by Nick Jackson in the fourth, increasing the lead 4-2.

The Riptide would tie the game up once again in the sixth inning when Zach McLeod launched a double that scored the tying run to chase POWER starter Luke Barker out of the game. It was Barker’s first start of the year, as he got the no decision after working 5.2 innings and striking out six.

Ryan Raslowsky would deliver the go-ahead single in the sixth inning that scored Nick Jackson with two outs. Jackson would also be impressive at the plate, going 3-for-4 with an RBI and a run scored.

Two more insurance runs were added by Palm Springs in the seventh that were supported by a triple for the catcher Cody Gaertner that made the score 7-4.

Those insurance runs would prove to be important as the Riptide pushed one across in the eighth inning to get within two runs of the POWER. OC would make things interesting in the ninth inning when they loaded the bases with only one out. Jordan Cavazos would come on to shut the door and earn his first save of the season.

The win would move the POWER’s SCCBL record to 3-2, which now pushes Palm Springs into a tie for third place with the Inland Valley Bucs.

The POWER will next be in action against the OC Riptide once again on Wednesday night to finish the two-game series at Palm Springs Stadium. It will be Family Appreciation Night brought to you by Jack in the Box that includes $1 admission. Gates will open at 6 p.m. and first pitch at 7:05 p.m. 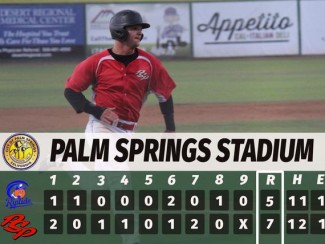