POWER Win it on a Wild Walk-Off 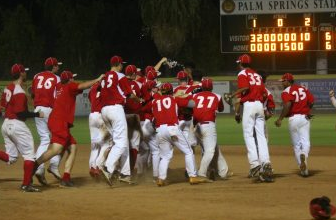 Grande continued his early-season hot streak by going 2-3 with a walk and an RBI. Dunn joined Grande with a multi-hit game of his own, leading off the ninth inning with his second hit of the night. Hunter Montgomery (University of Portland) followed Dunn with a double to left field, bringing up Brady Shockey (USC) with a chance to win it.

After a brief mound visit, the Bucs decided to intentionally walk Shockey, but the first pitch, an intentional ball, sailed wide and bounded to the backstop. Dunn came into score on the wild pitch with a headfirst slide and the POWER walked it off with a 7-6 victory.

Corn pitched his second long relief outing in three days for the POWER, escaping bases loaded jams as he came into the game on both Thursday and Saturday night.  Caleb Mitchell (Mercer) appeared in his third game in as many days, collecting his first win of the season by striking out three in a scoreless ninth. The duo held the Bucs hitless from the fifth inning on, allowing the POWER bats to erase the deficit.

Following a two-game sweep of the Inland Valley Bucs, the POWER remain at home to face the East LA Dodgers on Sunday night with the first pitch coming at 7:05 PM.