PALM SPRINGS, Calif. – After dropping game one of the SCCBL Championship Series, the Palm Springs POWER won games two and three to earn their seventh championship in their history.

The Riptide scored first after Andris Rizquez continued his hot streak in the playoffs by smacking a 1-out triple down the right field line, his sixth extra-base of the playoffs. Rizquez scored on a sacrifice fly hit by Riptide shortstop Zach McLeod to take a 1-0 in the second inning.

Parker Joe Robinson, the OC Riptide starting pitcher, sat down the first nine hitters he faced while also striking out a third of those batters. It was the tenth batter that gave the Riptide some trouble when Zach Davis reached base on an error and then Nick Jackson smacked an RBI double to put the POWER on the scoreboard. Later that inning, Ian McLoughlin would poke a single into the outfield that would score Jackson and give the POWER a 2-1 lead.

Angel Landazuri would once again throw an impressive game by only allowing a single run on five hits in five complete innings of work to earn the win, his second of the year.

Two more insurance runs were added by the POWER in the seventh inning on a two-out single by Cody Gaertner that scored two runs. Gaertner would lead the team offensively by going 3-for-3 with two RBIs.

The final three outs were recorded by Keaton Cenatiempo to secure the seventh SCCBL championship and fourth in a row for the POWER. With the series victory, the POWER have secured a spot in the So Cal World Series starting on Wednesday against the winner of the OCCL. But before that, the POWER will be playing the East LA Dodgers on Tuesday Night at Palm Springs Stadium. Starting at 7:05. 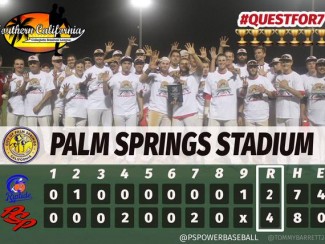