PALM SPRINGS, Calif. – The 2015 SCCBL champion Palm Springs POWER hosted Game 1 of the SoCal World Series Wednesday against the Orange County Waves from the Orange County Collegiate League. In a game that was called off in the top of the seventh inning due to inclement weather, the POWER earned a blowout victory against the Waves by a score of 11-1.

Zach Davis was the first to score on the night in the bottom of the first inning. He led the inning off with a single and was driven in on a sacrifice fly by Cody Gaertner. Davis scored again in the third inning on a wild pitch.

The POWER offense didn’t stop with Davis’ run in the third. Dillan Smith continued his impressive season by driving in both Nick Jackson and Ryan Raslowsky on a single to make the score 4-1. Two batters later, Tyler Finkler extended the lead with an RBI single of his own, scoring Daniel Sander. Finkler later came around to score on Ian McLoughlin’s RBI single, making the score 6-1 after three innings.

McLoughlin didn’t end his hot hitting on the night as he drove in Smith and Sander on an RBI double in the bottom of the fifth. He finished his evening 2-for-4 at the plate.

In the sixth, the POWER plated three more runs to bring the score to 11-1. Gaertner delivered an RBI double that brought around Jackson and Raslowsky. Pinch-hitter Jonathan Serven added to the lead by driving in Gaertner on a single.

Keaton Cenatiempo made the start on the mound for Palm Springs after grabbing the save Sunday to clinch the SCCBL championship. The right-hander from BYU allowed just one unearned run on two hits through five innings and earned a team-leading sixth win on the summer season.

Matt Valencia was impressive in relief, going one and a third innings with three strikeouts. Valencia got through just one batter in the top of the seventh before the game was delayed and then canceled due to inclement weather.

The POWER improved their record in 2015 to 38-13 and lead the SoCal World Series one game to none. They will look to clinch the series Friday night at 7:05 p.m. when they take on the OC Waves in Game 2 at Palm Springs Stadium. 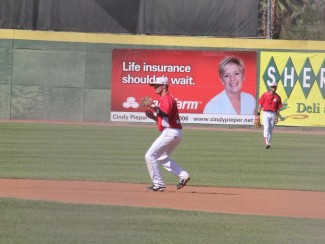