The POWER put across runs in every inning except the sixth, getting things started on a set-play double steal with runners at first and third in the first inning. Frankie Torres (JR, Vanguard University) broke from first and got in to a rundown, allowing Marcus Romero (SR, Southern Utah University) to come home from third before Romero could be tagged out for the final out.

The POWER ran all over San Francisco tonight, especially off of Seagulls starter Mark Rajeski. Palm Springs swiped nine bags, six of them off the starter, including three steals of third base, in just three innings.

Six of Palm Springs’ 15 hits went for extra bases, helping the POWER put an astounding 12 runs across in total. 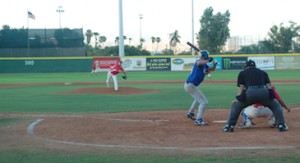 All in all, the POWER pitchers combined to give up just one run on six hits. They struck out 12 batters and walked none.

The POWER finish up play in the SCCBL regular season this week with two against the Inland Empire Aces on Tuesday and Wednesday and two against the Thrashers Friday and Saturday before back-to-back days off in preparation for the postseason. All four games are at home with the first pitch for each game coming at 7:05 from Palm Springs Stadium.

With a victory this evening as well, the So Cal Athletics of the SCCBL have clinched the second seed in the postseason tournament, setting up the showdown between the league rivals.

Game one of the championship series will be Tuesday, July 26th at 7:05 at Palm Springs Stadium as the POWER host the Athletics. Gates open at 6:00 pm. So Cal will host game two at Rio Hondo Community College in Whittier, CA on Wednesday July 27th. The POWER will host game three, if necessary, on Thursday at 7:05 back in Palm Springs.

Both POWER home games in the playoffs with be $1 Beer Nights at Palm Springs stadium; all Bud and Bud Light draft beers will cost just a buck.