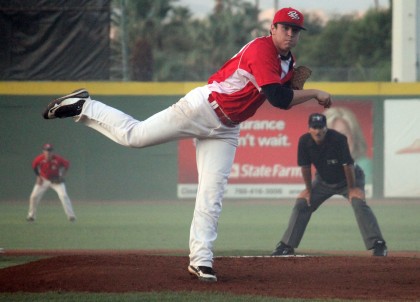 Matt Anderson (6-1) pitched seven shutout innings en route to his sixth victory of the season. He struck out 15 East LA hitters to up his season total to 95 in 61 innings. Anderson’s consecutive scoreless inning streak is now at 39. His season ERA now stands at 1.03.

Edgar Gomez pitched the final two innings to close out the game for the POWER.

With the win, Palm Springs has tied the franchise record for wins in a season set in 2011 with 41.

The POWER are off on Thursday before resuming the series on Friday night at Palm Springs Stadium. Palm Springs needs just one more win to capture the World Series championship. Ryan DeJesus (7-0) will start for the POWER on Friday. First pitch is scheduled for 7:05 p.m.