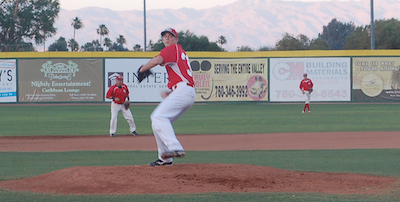 PALM SPRINGS, CA – The POWER won their tenth straight game and improved to a perfect 5-0 in Southern California Collegiate Baseball League play, beating the So Cal Athletics 5-4 on Sunday Night. It was Bark in the Ballpark at Palm Springs Stadium, and the POWER pleased the 421 fans and their furry friends to sweet victory, tallying another ‘W’ in the win column in a very close and competitive ballgame against their conference rival from the City of Angels.

The Athletics struck first, scoring on an error by POWER third baseman Kenny Sigman (JR, South Mountain Community College), but an error from the Athletics in the third would set the table for a big 2-RBI single from the POWER’s Ryan Jones (JR, Ventura College), giving the POWER a 2-1 lead. The hit would put the POWER on top 2-1, and kept Jones’ team high hitting streak alive, which now stands at 10 after his 2-for-4, 2RBI effort

The lead changed four times in the ballgame. The Athletics went on top 3-2 in the fourth, the POWER retook the lead in the same inning on an RBI triple by Justin Cureton (his team-leading third of the season), and finally, after the Athletics tied the game, the POWER scored in the sixth inning to take the 5-4 lead on an RBI single from Evan Boyd (JR, Mercer University). The pitchers on both sides would shut down the bats the rest of the way. 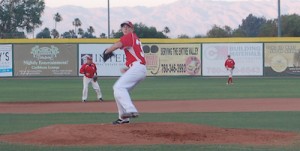 Casey McCarthy battled to get the W

Palm Springs starting pitcher Casey McCarthy (SR, California State University, San Bernardino) struggled a bit out of the gates for the POWER, allowing twelve Athletics baserunners: seven on hits, three on walks, and two via errors. “Early in the game I just wasn’t locating as well as I should have been, and I was having trouble with my slider to begin with, so I had to go with my change-up and focus on command,” McCarthy said of his early struggles. Despite the somewhat rough start, McCarthy kept the POWER in it.

After multiple mound visits from the fourth through seventh innings, when it appeared he might be pulled for reliever Jose Garcia (SO, College of the Desert), McCarthy bared down, setting three straight batters down after giving up a leadoff single in the seventh. The final act of McCarthy’s night was recording a strikeout of Athletics center fielder Francisco Fuentes, McCarthy’s fifth strikeout. He froze Fuentes–fittingly, on the slider, and it was perhaps the best pitch he threw all night. It was a gritty performance from the righty, as he showed his ability to pitch when he didn’t have his best stuff–the sign of a truly talented starter. When it was all over, he allowed only one earned run and came away with the victory, improving to 2-0 on the season.

Tony Guerra (JR, California State University, San Bernardino) recorded the final six outs of the intense battle, not allowing a baserunner and setting two Athletics down on strikes. He picked up his fourth save of the season, and the junior has yet to allow a run in his 7.2 innings of work.

Boyd had a big night, reaching base three times with two walks to go along with game-winning RBI single in the sixth inning; he also scored a run. Boyd is now second on the team in OBP% at .476.

The Palm Springs POWER take the field next against another league rival, the East LA Dodgers, Tuesday night at 7:05 pm. It is $1 Draft Beer Tuesday, so all fans can enjoy $1 Bud and Bud Light drafts as well as $1 bottled waters.  The gates at Palm Springs Stadium will open at 6:00pm. All POWER games can be heard live on www.PSPBB.com, with select games simulcast on NewsTalk 920 KPSI Palm Springs. Also, be sure to check out our blog for more team information, including the lineups before every POWER game.