PALM SPRINGS, Calif. – The Palm Springs POWER suffered their first series sweep of the season at the hands of the Orange County Riptide, dropping Saturday’s game by a score of 9-1.

Tyler Wells made his seventh start for the POWER this season. He ran into some trouble in the fourth inning, allowing six runs to the Riptide on six hits. He finished his night with three and two-thirds innings pitched, walking two and striking out two.

Jonathan Hernandez came on in the fourth and made another long relief appearance for the POWER. Hernandez pitched four and a third innings on the night, allowing three runs on five hits, with just one walk and three strikeouts. Tyler Finkler also made a relief appearance, throwing a scoreless ninth inning.

The Riptide exploded on offense yet again, plating nine runs on 13 hits. For the series, they scored a total of 21 runs on 30 hits against the POWER pitching staff.

The POWER bats were uncharacteristically quiet in the game as they only managed one run on nine hits. The lone run came in the bottom of the ninth, when Daniel Sander drove in Miles Bice on a sacrifice fly with the bases loaded. Connor Hornsby, Dylan Garcia, and Harry Shipley both notched multi-hit games.

With the loss, the POWER are now 27-10 overall in 2015 and 11-5 in SCCBL play. They will finish the weekend with a non-conference matchup Sunday night against the So Cal SKLZ. First pitch is scheduled for 7:05 p.m. at Palm Springs Stadium. Gates will open at 6 p.m. and the first 200 fans to walk through the gates will receive a free POWER ice cooler.

POWER fall to Riptide in 12-10 thriller 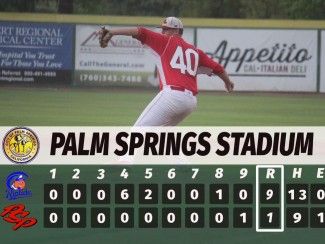