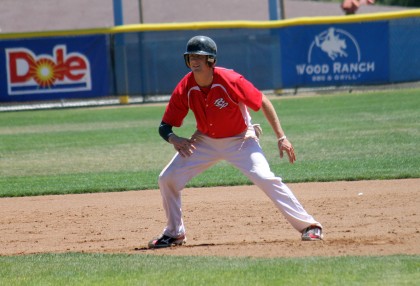 AGOURA HILLS, CA – Hank Yates had a perfect day at the plate going 4-for-4 with three RBI, including a 3-run home run, to pace the POWER (18-5, 11-4) as they defeated the LA Thrashers 8-1 in game one of a doubleheader at Agoura High School on Thursday.

POWER pitcher Ryan DeJesus (3-0) had his second straight standout performance on the mound throwing seven innings of one-run ball with nine strikeouts as he picked up the win.

Captain David Kiriakos added two runs and an RBI while Ryan Jones pitched in with a single and RBI.

Thrashers starter Josh Ferrell pitched six strong innings before letting up four runs in the top of the seventh as the Power broke the game wide open.

Left-fielder Dylan Becker followed up Yates’ perfect game with one of his own going 3-for-3 with a triple, two stolen bases and three runs scored as the POWER (19-5, 12-4) pummeled the Thrashers 11-4 in game 2.

Agoura High alum Chad Clark had three hits and three RBIs for the POWER offense that finished with 14 hits.

Thrashers designated hitter Jack Heidelman had a big game offensively going 3-for-3 with two doubles and RBI and a walk.

The POWER are back at home tomorrow as they take on the San Luis Obispo Rattlers at 7:05 pm. The Thrashers have a day off tomorrow before heading to Long Beach for a doubleheader with the Legends.