POWER Sweep Bucs, Back at Top of Standings

PALM SPRINGS, Calif. – The POWER have climbed their way back into a share of first place in the SCCBL with a 13-1 win against the Inland Valley Buccaneers. The win gave Palm Springs the 2-game sweep of their SCCBL rival that helped improve their conference record to 6-2 and an overall record of 15-6.

After being shut out in last night’s game, the Inland Valley Buccaneers quickly ended that streak in the top of the first to take an early 1-0 lead.

The POWER would answer right back with two runs of their own in the bottom of the first. Connor Hornsby would knock a base hit up the middle to score Ryan Raslowsky with two-outs. Hornsby would steal second base by miraculously avoiding a tag in a rundown to keep the inning alive. Cody Gaertner would later drive in Hornsby with another 2-out RBI single to take the lead, 2-1.

In the third, Palm Springs would add to their lead with a long double by Dylan Garcia that would score Daniel Sander.

The game would be broken wide open in the fourth inning after Ryan Raslowsky set the tone with a leadoff triple and the hits would come pouring in after that. Four more POWER hitters would record singles, as they would send 10 batters to the plate and score six runs in the inning. Miles Bice knocked a 2-RBI single that would push his season-RBI total to 12, a team lead.

Cody Gaertner would record his second RBI single in the fifth inning, as he would go 3-for-3 on the night.

Jeremy Alderman earned the win as he only allowed four hits and one unearned run over six complete innings while also striking out six. The win now gives Alderman a 2-1 record and a 1.98 ERA, third best among POWER starters.

The final runs of the night would be scored in the eighth inning by the POWER with a Court Iorg 2-RBI double and an Andrew Paz RBI fielder’s choice to make the score 13-1.

Keaton Cenatiempo, Avery Sullivan, and Max Compton would all make scoreless relief appearances that would preserve the POWER lead. All three pitchers would allow only one hit in their outings.

With an off day tomorrow, the POWER look to continue their winning streak against the Menlo Park Legends in a three-game set starting on Friday here at Palm Springs Stadium. Friday’s game will start at 6:35 and gates open at 5:30. Also, be sure to stick around after the game on Friday for a post-game fireworks show. 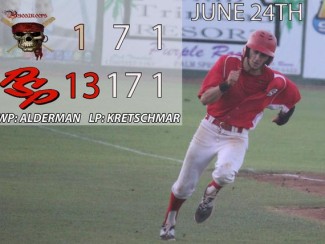