In the opening game, the POWER took an early lead by scoring two runs in the first inning on a couple of groundouts. In the second inning, they added another run thanks to an RBI single from Miles Bice, which scored Nick Jackson.

Tyler Wells started out his game on the mound strong, earning five strikeouts in his first three innings of work. He finished his afternoon after six innings, giving up two earned runs on four hits with no walks. He ended his game with nine strikeouts.

Team San Diego was able to fight back to a tie score with one run in the fourth and two in the sixth. In the bottom of the sixth, the POWER retook the lead with a Harry Shipley RBI single, bringing around Erik Maki.

However, the visitors surged ahead, scoring three runs between the eighth and ninth innings. Brian Stevenson was able to close out a 6-4 victory for TSD, despite the POWER getting the bases loaded with one out in the bottom of the ninth inning.

In Game 2 of the twinbill, the POWER once again got out to the early lead. Kobie Foppe scored on an error in the first inning to make the score 1-0 POWER. In the third inning, Foppe drove in a run on a triple, scoring Cody Gaertner. That led to another two more runs scoring in the third. Foppe notched one more RBI in the sixth, driving in Gaertner on a double. He finished his night at the plate going 3-for-3.

Ryan Raslowsky drove in another run on a sacrifice bunt to score Connor Hornsby in the fifth inning. That made the score 6-0 POWER, which eventually was the final score of the game.

Jordan Cavazos was terrific in the Game 2 start for the POWER. In his first start of the year, Cavazos allowed no runs on only two hits through seven innings, with six strikeouts and one walk. Matt Valencia relieved him and provided two shutout innings, striking out the side in both the eighth and ninth.

The POWER move their conference record to 1-1 and their overall record to 5-3. They will close out a two-game weekend series with Southern Nevada Sunday, with first pitch scheduled for 7:05 p.m. at Palm Springs Stadium.

POWER fall in game one against Southern Nevada 5-0 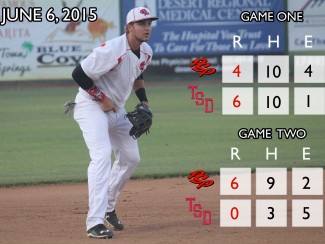 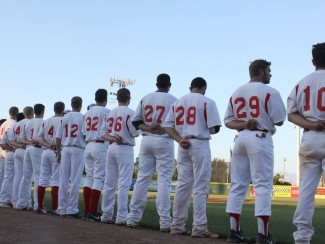