Palm Springs, CA – The Palm Springs POWER improved to 17-1 overall and 12-0 in SCCBA play, defeating the So Cal Cardinals 3-0 on Sunday night at Palm Springs Stadium behind timely hitting and dominant pitching. 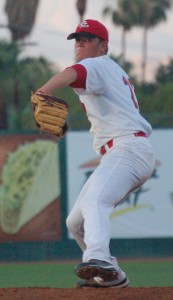 The POWER got on the board for the first time in the third on a Corey Black RBI-single.  In the fourth, the POWER followed up with two more runs on a towering two-RBI double by catcher Chris LeFay.  That would be all the scoring the POWER would need on the night as their pitching was once again near untouchable.

The POWER pitching staff shutout the second-place SoCal Cardinals for the second night in a row, with starting pitcher Aaron Brooks giving up four hits while striking out eight through seven innings.  Dustin Ispas came out of the bullpen to relieve Brooks and struck out two of the three batters he faced en route to a perfect inning.  Bryan Dalton came in for Ispas in the ninth and closed things down, earning the save.

The POWER return to action on Tuesday night when they look to complete the four game sweep of the second-place So Cal Cardinals at Palm Springs Stadium.  First-pitch is set for 7:05 PM and the gates open up at 6:00 PM.  On Monday night, the POWER host the Special Olympics softball game at Palm Springs Stadium.  The game kicks off at 6:00 PM and the players start warming up at 5:30 PM.  The game will consist of two combined teams of POWER players and Special Olympics athletes.  Admission is FREE to the public.