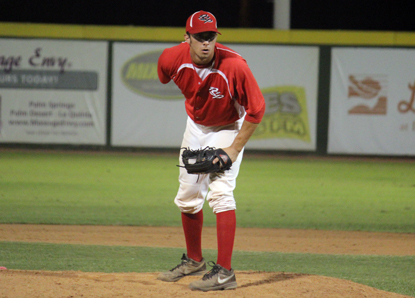 PALM SPRINGS, Calif. – The POWER (44-4) wrapped up their regular season with a commanding win over the So Cal Sklz on Tuesday, 12-4. Palm Springs has now won 14-straight games heading into the So Cal World Series on Wednesday.

Anthony Torres got the win in relief, throwing three innings and striking out five to earn his second win of the year. Doug Finley wrapped up the game for Palm Springs by pitching a scoreless eighth and ninth innings with four strikeouts.

Eric Urry lead the way on offense, going 2-for-3 with four RBI and a walk in four plate appearances. T.J. Bennett and Tyler Truitt also had memorable nights at the plate; Bennett singled in the fourth inning to set a new single-season hits record with 58, while Truitt’s two doubles set a new mark for most doubles in a single season (12). Palm Springs also set a new record for most stolen bases in a season, topping the mark of 168 set by the 2009 squad.

The POWER were quick to get out of the blocks, doing all their scoring in the first five innings. The red-and-white jumped ahead with four in the first, one run in each of the second and third innings, two in the fourth frame and rounded out the scoring with four more in the bottom of the fifth to make the score 12-4, where it would stand.

Palm Springs is next in action on Wednesday when the Orange County Waves make their way to the Coachella Valley for game one of the So Cal World Series. First pitch is scheduled for 7:05 p.m. Fans that cannot make it to the ballpark can catch all the action on pspbb.com.