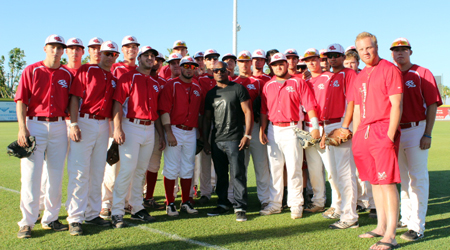 Catcher Colby Hamilton (Central Arizona) paced the offense going 3-for-4 with a run scored after entering the game in the top of the second inning. A.J. Young (Utah) started behind the plate but was eventually forced out of the game after being hit by a foul tip in the first.

Nate Pollock (Western Illinois) also got into the action offensively with a 1-for-3 night, including a 2-run double in the fourth inning.

Palm Springs-product Brooks Kriske (USC) did the rest on the mound earning his second victory of the season after holding the Waves bats to just two runs in five innings.

Palm Springs trailed 2-0 after 1 ½ innings before the offense came up with four runs in the bottom half of the second to take their first lead, 4-2.

They would plate four more runs just two innings later to put the game out of reach for good.

Outfielder Trent Pell (Oakland University) had an RBI in both of the POWER’s big innings and finished the night 1-for-3 with two RBIs and a stolen base.

“I think we run the bases really well and that jump starts our offense,” said Pell.

The POWER are back in action tomorrow as they take on the OC Blue Sharks on Kids Night presented by Desert Air Conditioning. Gates open at 6:30 pm with first pitch at 7:05.