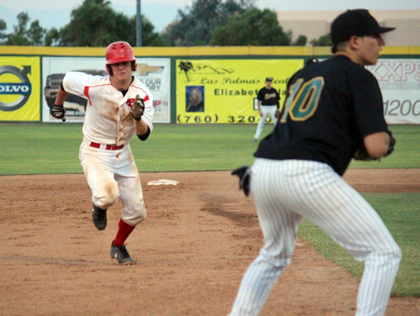 PALM SPRINGS, CA — With the midway point of the 2014 SCCBL season long gone, the three-time defending champion Palm Springs POWER, the Inland Valley Pirates and Team San Diego have emerged as the favorites to make the playoffs.

Continuing their string of summer dominance, the POWER (26-5 Overall, 6-2 in SCCBL) find themselves in the thick of a first-place hunt, yet again. With the arrival of the Inland Valley Pirates, however, reclaiming the championship in 2014 will take some added effort and determination.

As the standings sit now, the POWER are in second place, right behind the Pirates (20-5 Overall, 10-4 in SCCBL). Inland Valley played a majority their league schedule in the first half of the season and the POWER scheduled most of their conference games in the second half. Thus, the discrepancy in SCCBL wins and games played.

Despite having four less wins than the Pirates, POWER head coach Harry Gurley knows that the main stretch of the SCCBL season is just beginning for his squad, and there is no reason to worry.

“We just have to play one game at a time and try to win them all,” Coach Gurley said. “We’re ahead of them on the loss side, that’s all that counts.”

After the conference victory over the Inland Valley Buccaneers (6-16-1 Overall, 3-10 in SCCBL) last night, the POWER have eight critical conference games left to play in the next week and a half.

The POWER split their first and only series against the Pirates, and won’t play another SCCBL playoff contender until they meet up with third-place Team San Diego (20-12 Overall, 6-5 in SCCBL) for a doubleheader in San Diego on July 14. On the following day, the POWER head back to Palm Springs Stadium to conclude their season series with Team San Diego.

On July 18, the Pirates and Team San Diego will conclude their league schedules with a doubleheader at Cal Poly Pomona. Depending on how the POWER do in their final games, the results from the Pirates-San Diego doubleheader could have a serious impact on the SCCBL’s final playoff seeding.

If they go undefeated the rest of the season – or lose no more than one league game – the POWER will claim the No. 1 seed, the Pirates will take the No. 2 seed and Team San Diego will be relinquished to third place.

If the Pirates sweep Team San Diego in the teams’ final meeting, the Pirates would still need the POWER to drop three of their eight remaining SCCBL games to finish in first. A Team San Diego first-place finish would require sweeps of both the Pirates and POWER, and an additional POWER loss.

With only two losses, the POWER are still in the driver’s seat, and in control of their own destiny. Though all three teams are still alive in the SCCBL’s race for first, the odds are with the Pirates and the POWER.

“We have to play good ball,” Coach Gurley said. “We got a tough road ahead, nine games in a row, all of them league games, and we’ll be challenged. If we do well, we should be first if we don’t do well, someone else should be first.”