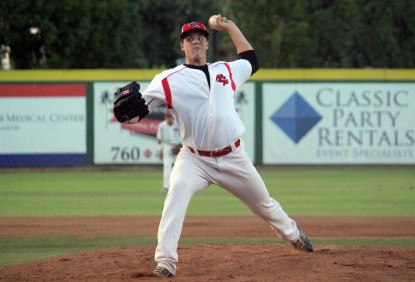 PALM SPRINGS – The POWER (14-1, 5-1) rode strong pitching and a five-run seventh inning to an 8-1 win on Wednesday night, finishing the two-game sweep of the Inland Valley Pirates in the process.

Anthony Lombardo lead the way at the plate, going 1-2 with a triple, two RBI and two walks. Austin Barrett also had a strong showing, finishing the night 3-5 with an RBI single in the seventh.

Ryan DeJesus pitched six scoreless innings to improve to 4-0 on the season. With the win, DeJesus now has 12 in his POWER career, good for third-most all-time in club history.

Mitch Bluman worked three innings in relief of DeJesus, striking out five and allowing just one hit to earn the save in his second appearance of the season.

Palm Springs jumped out to an early lead thanks to some sloppy play by the Pirates in the first inning. After Ryan Raslowsky walked Eric Urry attempted to bunt him to second. Inland Valley pitcher Cody Errautt fielded the ball cleanly but threw wildly to second base, allowing Raslowsky to reach third base. One batter later, Raslowsky scored on an errant throw to third by catcher Christian Kelley to give the POWER a 1-0 lead.

With the score 3-1 in the bottom of the seventh, Palm Springs extinguished any hope of an Inland Valley rally. After Tyler Truitt doubled and Anthony Torres reached on an error, Barrett singled to drive in Truitt.

Lombardo then torched a triple down the right-field line to score Torres and Barrett. Taylor Valentine came in and got Pirates out of the frame, but not before Michael Massi and Raslowsky had each added an RBI to make it an 8-1 lead.

The POWER are back in action on Friday night against the High Desert Heat. First pitch is scheduled for 7:05 pm at Palm Springs Stadium. Friday is Dollar Beer Night, with Bud and Bud Light drafts available for just $1. Fans that cannot make it to the game can tune in at pspbb.com.