POWER Out Duel Cardinals for the Win

Palm Springs, CA – The Palm Springs POWER pitchers once again showed their value to the team.  Locked in a pitchers duel the POWER pitchers outlasted the Cardinal’s pitching staff to a 2-0 victory.  The victory allowed the POWER to take another win in the match-up between the top teams in the Southern California Collegiate Baseball Association. 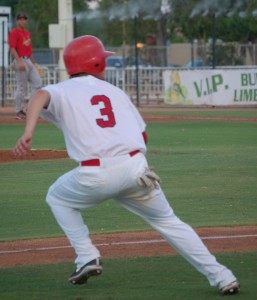 The pitching staff for the POWER allowed only five hits for the game.   POWER starter Brandon Kizer went five innings and was able to pick up the win.  He had four strikeouts in his, allowing only two hits and no walks. Brandon Love came into the game in the sixth inning and proved to be just as effective as Kizer.  Love picked up his first save of the season, while retiring five batters via strikeouts.  Neither POWER pitcher surrendered a walk to the Cardinals.

Centerfielder Brett Christopher started the scoring after delivering a two-out double, followed by a stolen base and wild pitch for the first POWER run.  Christopher had two stolen bases on the night.  Marcus Romero doubled as well for the POWER.  In the seventh inning Jacob Nelson led off the inning with a walk and later scored on a delayed double steal with Christopher on second.  Christopher stole second base and as soon as the catcher released the ball, Nelson broke for home and was safe without a throw.  POWER first baseman John Haberman went two for four on the night.

The POWER return to action Sunday night against the SoCal Cardinals at Palm Springs Stadium where it will be Bark in the Ballpark Night.  Fans are encouraged to bring out their dogs for the night.  First-pitch is scheduled for 7:05 PM and the gates open up at 6:00 PM.