POWER Offense Explodes for 18 Runs in Sweep of Packers 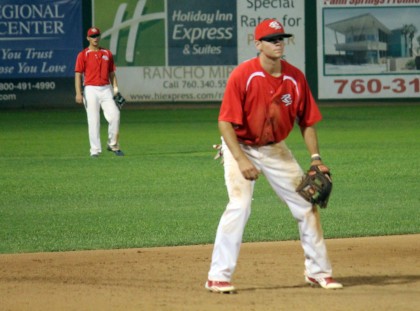 PALM SPRINGS, CA — The Palm Springs POWER (31-6) tied a season-high with 18 runs, completing the sweep of the three-game series with the Santa Maria Packers (13-24) 18-1. The win is the sixth in a row and fifteenth in 16 games for the POWER.

Chesny Young led the offensive outburst for Palm Springs going 5-for-6 with three doubles, a triple, two runs scored and six runs batted in. The five hits, six RBIs and four extra-base hits were all season highs for any POWER player.

Nick Baker (4-0) allowed just one run over five innings to pick up his fourth win of the season. Baker is now 14-0 in his two seasons with the POWER.

Palm Springs is off on Monday before opening a two-game home conference series with the Diamond Valley Sabers Tuesday. The POWER need to win just one of two to clinch the top seed in the SCCBL playoffs.

First pitch on Tuesday night is scheduled for 7:05 p.m. at Palm Springs Stadium. Tuesday is also $1 beer night at the ballpark.