PALM SPRINGS, CA – The POWER played host to the Nor Cal Longhorns Friday night and came away with another victory—their eighth straight. The Palm Springs POWER now stand at 9-2 on the season.

The offenses exploded early before both teams settled in, and the pitching staffs kept the bats quiet for the final four frames, as the POWER held on with a 5-3 victory in front of a raucous crowd of 620 POWER fans at historic Palm Springs Stadium.

The POWER struck first, as Alex DeLeon (JR, University of Kansas) scored on a Shane Turner wild pitch in the bottom half of the second inning. The Longhorns tied it in the top of the third when Brett Montague knocked in Tyler Tulowitzki, brother of Colorado Rockies star Troy Tulowitzki. The POWER retook the lead in the bottom half of the same inning with three runs, as the big hit of the inning was supplied by DeLeon again, this time an RBI-double, and the POWER led the rest of the way.

Jose Garcia (SO, College of the Desert) was brilliant in relief, fanning four and allowing just two hits in his three scoreless innings, bridging the gap to closer Tony Guerra who blew away the top of the Longhorn order, retiring them in order, including two of them on swinging strikeouts. Guerra threw just one ball in the inning and has thrown just nine balls all season to the 18 batters he has faced in his 5.2 innings of work.

Palm Desert High School graduate and La Quinta native, Nick Baker, improved to 3-0 in three starts with a five-inning effort, striking out four. Guerra picked up his third save of the season and remains pristine, as he has yet to be scored upon this summer. Guerra’s 12.7 K/9 is second only to Ryan Santhon (15.4 K/9). 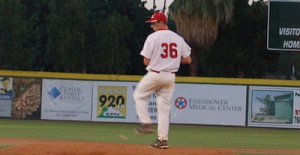 The POWER offense was lead by the 4, 5, and 6 hitters: Frankie Torres, DeLeon, and Ryan Jones. All three batters had three hits, each picked up at least one RBI (Jones had two), and only Jones didn’t account for one of the five runs to come across for the POWER in the ballgame.

The Palm Springs POWER match up against the Nor Cal Longhorns again Saturday night; first pitch is at 7:05 pm, as Julian Esquibel (1-1, 5.25 ERA) takes the mound for the POWER who look to continue their winning ways and extend their streak to nine wins. The gates at Palm Springs Stadium will open at 6:00pm. All POWER games can be heard live on www.PSPBB.com, with select games simulcast on NewsTalk 920 KPSI Palm Springs.