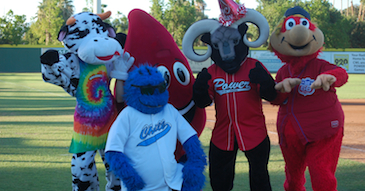 PALM SPRINGS, CA –- The POWER took on the San Francisco Seagulls Friday night for the mascot Rocky the Ram’s 8th Birthday at Palm Springs Stadium. The POWER couldn’t give Rocky a win, as the POWER lost for the fourth time this season, this time by the score of 5-2.

Four POWER pitchers combined in the effort, allowing just three earned runs, five total, but the POWER bats couldn’t get in motion. They left nine runners on base, hitting just 2-for-10 with runners in scoring position. 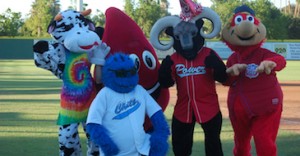 (Left to right) Woody from Ben and Jerry's, The Chill's very own Tundra, Ubie from Community Blood Bank, and Bernie from the Inland Empire 66ers were on hand for Rocky's 8th Birthday Friday Night

After the Seagulls took an early 2-0 lead on runs in the third and fourth innings, the POWER tied the game in the fifth on a suicide squeeze from Zack Haley (SR, Liberty University), scoring center fielder Justin Cureton (JR, Indiana University). The Seagulls would quickly respond, plating two in the seventh and one in the ninth, giving San Francisco a 5-2 lead going into the last half inning.

The POWER got runners on; Chett Zeise (SR, University of Iowa) led off the inning with a hit-by-pitch, and David Kiriakos (JR, Riverside City College) slapped a sharp two-out single, putting runners at first and third and the tying run at the plate. After working the count to two balls and two strikes, Zack Haley took a close call on the inside corner for strike three to end the ballgame.

David Kiriakos had a nice evening in the leadoff spot, despite the loss. The POWER shortstop reached base four times, going 2-for-3, twice getting hit by a pitch.

With the loss, the POWER drop to 34-4 on the season. Jose Garcia (SO, College of the Desert) took the loss, his first decision of the summer.

The POWER take on the Seagulls against tomorrow night for Golfers Appreciation Night at Palm Springs Stadium. First pitch is at 7:05 with the gates opening at 6:00. The POWER have already clinched the #1 seed in the SCCBL and have guaranteed home field advantage for the playoffs, which begin on Tuesday, July 24th. For ticket information go to PSPBB.com or call (760) 778 – 4487.