PALM SPRINGS, Calif. – The Palm Springs POWER were unable to complete the sweep of the Menlo Park Legends on Sunday night after the Legends relied on clutch hitting and electric pitching to take a 9-2 win.

In the second consecutive game, the POWER struck first in the second inning on an RBI single by Tyler Finkler that scored Jonathan Serven to give the POWER their only lead of the game.

Ryan Raslowsky continued his hot hitting by leading off the third inning with a double into deep left-center field. However, the Menlo Park starter Nick Gagnon was able to escape the scoring threat and give the Legends plenty of momentum.

They rode that momentum shift into the top of the fourth where the Legends took a two-run lead behind three hits and a costly error by the Palm Springs left fielder, Erik Maki.

Another run would be added the next inning for Menlo Park after two sacrifice hits brought in Tobias Moreno to make the score 4-1. The Legends wouldn’t look back as they would put two more runs up in the sixth inning to take the lead for good.

The POWER would stage a brief comeback after they scored in the sixth when a single was mishandled by the Legends’ left fielder Robert Henry. That error allowed Ian McLoughlin to score from second base, cutting the Menlo Park lead to 6-2.

Palm Springs starting pitcher Ryan Avila threw seven complete innings giving up five earned runs with eight hits. He would be handed the loss that would push his record to 1-1.

Timely hitting proved to be the weakness for the POWER on Sunday night as they left 13 runners on base and even outhit the Legends. Dillan Smith and Ryan Raslowsky both notched multi-hit games for the POWER.

Cody Strong would add two more runs for the Legends in the eigth inning when a bloop single was just out of the reach of a diving Court Iorg in leftfield. Strong would lead Menlo Park offensively going 2-for-3 with 3 RBIs on the night.

The loss now makes the POWER’s record 17-7 on the year, but they will have an important league matchup with Team San Diego tomorrow for a doubleheader. This will be the first road trip of the year for them and game one will start at 1 p.m. and game two at 4 p.m. Both games will be broadcasted on the official Palm Springs POWER internet portal at portal.stretchinternet.com/pspower for fans to listen live.

POWER hang on against Legends to win 10-9 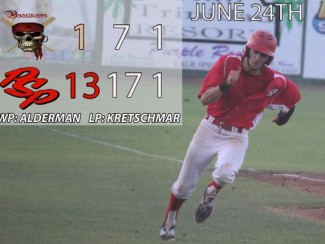