PALM SPRINGS, Calif. – The Palm Springs POWER dropped game two against non-conference opponent ATH Academy in a close 3-2 ballgame at Palm Springs Stadium on Saturday night. The POWER were led offensively by Court Iorg and Andrew Paz who both had multi-hit games.

The POWER would answer right back with their own two-run inning. Andrew Paz drove in both of those runs on a double down the right field line that would score Kobie Foppe and Court Iorg.

It would take six more innings before any more scoring as the POWER starting pitcher Tyler Wells wouldn’t allow another hit in the rest of his five-inning outing.

ATH would come close to scoring in the third when the first two batters would reach via an error and walk. Wells would get some defensive help on two great plays by third baseman Dylan Garcia to keep the inning scoreless.

Christian Deaton would score the go-ahead run for ATH in the seventh on a single off of POWER reliever Matt Valencia.

Palm Springs would threaten both in the eight and ninth innings but were unable to scratch one across. That would be the story of the game, as the POWER would leave eleven base runners the entire game.

This loss was the first in one-run games this year for the POWER as they were 3-0 in such games before this matchup. It also pushes their overall record to 12-6 in 2015.

The POWER look to bounce back on Sunday night against the FBA Sharks for a Giveaway Sunday at Palm Springs Stadium. This weeks giveaway is admission to Wet N’ Wild for the first 500 fans. Game starts at 7:05 p.m. and gates open at 6:00 p.m. 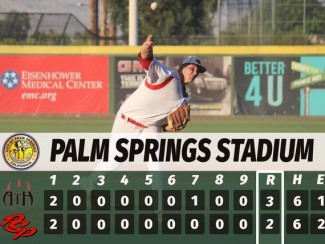