PALM SPRINGS, Calif. – The sweep was completed for the Palm Springs POWER on Wednesday night as they defeated the Arroyo Seco Saints for the second night in a row, this time by a score of 8-6. Despite the Saints scoring in four consecutive innings, the POWER never lost the lead after the fourth inning.

Getting his first start of the year for the POWER was the pitcher Jonathan Hernandez and it did not start out the way he wanted it to. The first five batters of the game found themselves on base, but Hernandez did a good job by only allowing a single run.

The POWER answered back quickly in the next half inning with Ryan Raslowsky scoring on a ground ball hit by Connor Hornsby, to knot the score at 1. In the third inning, Kobie Foppe extended his hitting streak to 13 games with a single.

Jonathan Hernandez started to settle in starting in the second inning, only giving up three hits in the rest of his five-inning outing. He would only give up a single earned run and strike out six as he earned his first win of the year.

Last night’s hero, Court Iorg, kept his hot hitting up when he launched a long double over the left fielder’s head to score Connor Hornsby in the fourth inning. Just after that, Cody Gaertner singled in Iorg to give his team a 3-1 lead.

In the fifth, Arroyo Seco would put up a single run on an RBI single by Justin Bardwell. Bardwell led the Saints offensively, going 4-for-5 with two RBIs.

In the bottom of that inning, two errors by the Saints would prove to be costly as the POWER plated two runs in that inning without registering a hit. Zach Davis and Miles Bice would score both runs, improving the lead to 5-2.

Again in the sixth inning both teams would find the scoreboard, each putting up one. Chris Davidson scored on a wild pitch for Arroyo Seco and Dylan Garcia scored on a Nick Jackson single with two-outs.

A big opportunity arose for the Arroyo Seco Saints in the seventh when the inning was led off with three consecutive hits that would score a run. Chad Clark would get the call in relief, inheriting all three runners with nobody out. Clark got a double play and a groundout end the inning with only a single additional run him scored, keeping the POWER in the lead at 6-5.

The back-and-forth action would continue as the POWER would get another run in the bottom of the seventh on another costly throwing error by the Saints that would score Connor Hornsby for the second time.

The Saints wouldn’t let a lead-off single by Spencer Rouse go to waste in the eighth, as he would score on a groundout. The POWER would answer once again in the next half inning with Dylan Garcia scoring on a wild pitch for an important insurance run.

Chad Clark would earn his second save of the season after he worked a clean ninth inning, the first scoreless inning since the fourth inning. The non-conference win now makes the POWER’s record to 21-7 in 2015.

The Palm Springs POWER look to add to their four-game win streak this weekend as they have a three-game series against the San Francisco Seals starting on Friday night at Palm Springs Stadium. Gates will open at 6:00 p.m. and first pitch is at 7:00 p.m.

POWER win in walk off fashion over Saints 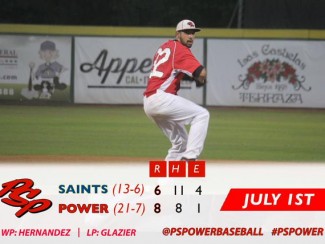